FREE SHUTTLE BUS TO THE OPENING: Thursday November 14, 2019
ERSTE Foundation is offering a free shuttle bus from Vienna to Bratislava and back. More info here

I overslept. It was raining. I had a flat tyre! My cat died. MY grandmother died. I had to help an old man who had fallen down. I couldn’t inform you, because the battery of my mobile wasn’t charged. I missed the bus,because the bus-stop moved and I didn’t trust the driver.
(Anette Krauss: EXCUSES, 2007 – ongoing)

The role of upbringing and the educational process, although officially formulated as the development of the personality, is generally perceived as the conscious preparation for work. It reflects the technocratic model of the approach to society and its individual members. The introduction of compulsory education in the 18th century, interpreted as an effort to provide access to elementary education for everybody, was motivated not only by the selfless desire to raise the intellectual level of the population. On the contrary, considerably more pragmatic goals were also behind it, such as the necessity to innovate the armed forces required by more sophisticated military strategies, the management of obedient subordinates through an increasingly bureaucratic state machinery and last but not least, the industrial revolution.

Hidden curriculum is the term used especially in critical pedagogy and defines the “side effects” of school instruction. During the transfer of knowledge and skills of the formal curriculum, unintended behaviour models, opinions, social norms and ideologies are also transferred. Students subconsciously learn them and go on to use them at later stages of their lives. Thus, the hidden curriculum is not a fully conscious process and may reproduce existing inequality in society and hierarchical structures; but the awareness of it may also have affirmative, emancipative and transformational potential.

The vision of universal education for all to enable everyone to equally join the industrial mass production has lost its justification. In spite of this, schools continue to suppress the internal motivation to learn in students and education is degraded into an exercise in collecting grades with the aim to acquire a paper certifying its completion. Aberrations of biological laws, when instead of endorphins, adrenaline (stress instead of feelings of happiness) floods the brain when we study or work leave significant scars. Children are “industrially” forced to handle the same amount of material in the same way and in the same amount of time. Some children are not able to master all of the material while others are bored; this is because every single child learns in a different way and at a different pace. These habits of the hidden curriculum, acquired mostly in the first years of elementary school, lower the hope for an individual’s creative development and ability to get the most out of life and work.

In these times of instability, the “bullshit jobs”, the precarization and the call to adapt to labour 4.0., when jobs requires more creativity, cooperation, responsibility and the creation of more jobs, the change of our approach is necessary. However, a positive impact can be seen in approaches which intentionally work with the hidden curriculum towards a just social transformation. Free schools based on a respectful approach, and the principles of democracy and critical pedagogy, which consciously work with the concepts of political and social emancipation are good examples. The educational system reflects the social structure of a given society. Therefore, in our free and democratic society we should talk about both freedom at work and freedom in education.

Can we imagine how our society would look if the educational model were based on mutual respect and democratic principles?

This exhibition project is based on a long-term curatorial research, which also involved discussions with local pedagogues, activists, academics working in the traditional school system, in alternative education and institutes of educational research. Besides the displayed artworks, the exhibition has a performative section consisting of courses, workshops, lectures and performances. It is based on three underlying lines: the un-learning of standpoints and assumptions which we acquire at school; the approximation of concepts such as de-schooling, radical pedagogy and democratic education; and lastly, reflections on the current situation and attempts at reforming the educational system in Slovakia. 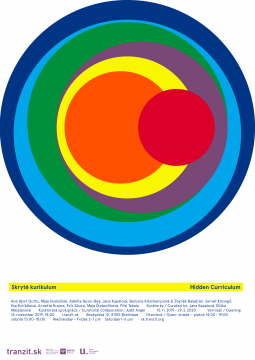 Related
Advisory Circle: Hidden Curriculum in Our Lives
EDUPEJDŽ
Hidden Knowledge
How can we learn something that does not yet exist?
Mindfulness
Non-violent Communication
Today is closed