If we want to experience the future today, we have to avoid today’s vulnerability and despair.

I would like to invite you to consider the hypothesis that we lock today’s present deep into our unconscious mind and in this way we feel more and more excluded, abandoned and lonely. Is this the nature of our double-mindedness? Is it also ultimately a cynical method of oppression and exploitation in everyone’s struggle with everyone, which is also forced upon us by
technology, objectivization and totalization? Do we want to pass this closedness on to other generations or can we learn through openness therapy?

We can also talk together about the pathology of the individual and society, the slight difference between close and closed. We can experiment with the forms of relatedness and get to know what we know somewhere deep down and to develop subjectivity, aesthetics and ethics as a form of generosity toward others.

Ján Ballx is psychiatrist and artist. He focuses on issues related to life, death, and the mind and spirit, particularly through the optics of relationships and ethics. He graduated from the Faculty of Medicine in Brno and has worked as a psychiatrist in Nitra, London and Bratislava. Nowadays he has his own private practice in Bratislava. He also teaches psychiatry and psychotherapy internationally as supervisor. He served on the committee of the Slovak Psychotherapeutic Association and was president of Slovak Gestalt Therapy Association for many years. In the 1990s he was co-founder of the Subterra Project in Nitra. He has participated in solo and collective exhibitions at the Slovak National Gallery in Bratislava (2010, 2013) and solo exhibitions at the AMT Gallery in Bratislava (Dimensioni Nuova, 2013), the Hit Gallery (*hit, 2015), at the psychiatric hospital in Nitra (10, 2016), and the Central Slovakia Gallery in Banská Bystrica (HOB, 2018). From 2009 to 2012 he was a member of the Debili artistic group. Together with the APART Collective he published the book X (2017). He also recently cooperated on the translation of a text by Donna M. Orange for the Klimatická kríza proceedings (Climatic Crisis, 2019).

Event is part of the Hidden Curriculum exhibition and will be held in Slovak language. 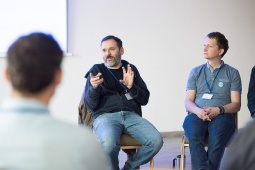