We Have Never Been Strange

Discussion on performance, performativity and whether they are still alive.

Lucia Repašská and Michal Murin will discuss the format of artistic performance. About where the audience's expectations have shifted since the 90s and what we stubbornly recycle and imitate from this format, almost mechanically, so that we ourselves contribute to the fatigue of the material of performances: With each such repetition, a millimeter of the content is lost. Or is that perhaps the intention? Are strange things in white cubes, black boxes, or public spaces transgressive at all anymore? Or do we somehow rely on them, seeking them out actually on purpose, just to make sure we're not
quite dead inside yet? In such a scenario we come to see them or participate in them, we experience something through them, we have a drink, small talk and go home. In the era of the attention economy,
isn't the Society of the Spectacle rather harmless nostalgic taxidermy? Isn't the principle of open-ended randomness actually the most predictable dramaturgical alibi? Is boredom the new transgression?

Lucia Repašská is the director and artistic director of the D'epog production platform. As an artist
moving between the alternative and underground scenes, she collaborates with prominent figures of
independent culture and deals with the phenomenon of actor training and experimental stage work on the basis of site-specificity, drama, intermedia and performance. Her academic practice at the JAMU in Brno includes activities at the Cabinet for Theatre and Drama Research, where she explores the limits of spectatorial perception in contemporary audiences in collaboration with the Institute of Biomedical Engineering at the Brno University of Technology and the HumeLAB Laboratory for Experimental Humanities. She regularly presents the work of the D'epog ensemble and her own teaching and lecturing activities at conferences and theatre festivals at home and abroad. In 2015, she published the book Composition by Decomposition: Decompositional Principles in Performance Design.

Michal Murin (1963, Prešov) realized his first performance in 1983, in addition to extensive solo projects and performances he was active in the Labyrint II group (1985-1986) and its successor, the Balvan movement theatre (1987-1993), Transmusic comp. (1989-2017) and Lengow & Hermes (1997-2003). He has also made joint performances with Jozef Cseres, Peter Kalmus, Milan Adamčiak, Ben Patterson, etc. He has attended butoh dance workshops with Min Tanaka, Living Theater, Rolf Dennemann, Seiji Shimoda and the Derevo company. He has worked in action art, conceptual, installation, in situ, multimedia, theatrical, body, radio art, sound art, lecture performance, musical theatre, phonic poetry performance, experimental theatre, flux events and pieces, photo and video performances. He has realised more than 350 events and performances at festivals and galleries in Europe, Japan, Australia and Taiwan. He has also published on the subject of performance (Art Action 1958-1998, editor of Profil 3/1993).

Event is part of the We Have Never Been Closer exhibition project. 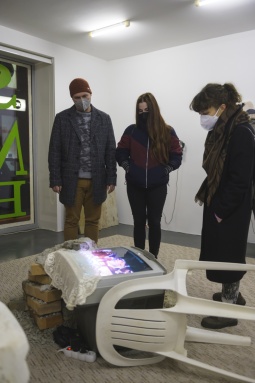