The event is open in OP mode until the capacity of the space is reached.

It will be held in Slovak and Czech.

I recently had my library repapered. Of course, I helped with the work, and then I noticed the lack of enthusiasm with which the paper hangers were working, despite the fact that I was paying better than minimum wages. Why is it, I asked them, that you can’t develop any passion for your work even though you are paid for it? The good souls didn’t have any answer to that one.
Peter Handke: They Are Dying Out (1973)

The paradigm of the culture industry provided an example of an economy that functioned by producing an increasing number of occupations (and distractions) for people who were in many cases working for free.
Hito Steyerl: Art As Occupation (2011)

Art and culture are areas in which the paradox of the 1990s shows up very, perhaps too clearly: On the one hand, the enchantment of the suddenly acquired freedom of expression, the end of censorship, the reconnection with Western colleagues, the opportunity to travel and create independently. Many artists and initiatives came out of the underground and into the spotlight. Instead of apartment performances, clandestine concerts and ephemeral exhibitions, they were suddenly part of official events, even at the state level. This release and euphoria produced many remarkable events, festivals, experimental galleries and independent art centres.

Parallel to democratization and liberalization, however, were processes of wild privatization of public property, commodification of public space, the rise of unemployment, and the emergence of mafia practices. The events of everyday life often surpassed artistic experiments in their radicalism and violence, but went unnoticed by artists. One of the consequences of this exclusion of art and culture from everyday reality is the idea of art as "something more than work", as an independent field, a relationship, a mission, an experimentation that is freed from the necessity to produce. According to this idea, artists and cultural organisers are supposed to find fulfilment in the very possibility to create and organise and, in addition, to 'make a living'. The disrespect and distrust of institutions has also manifested itself in the fact that the action - in terms of creation, reflection, and the cool factor - has moved to independent centres, clubs, and newly discovered spaces.

But is it possible to sustain this type of creation and enchantment other than temporarily? In a system set up in this way, can someone without a family background and economic support afford to take risks? What has changed in the meantime if today artists and cultural organizers are calling for strong and transparent institutions, social security, insisting on art as work, and creating unions and other platforms of solidarity that were dismissed as communist relics in the 1990s?

Mária Janušová studied Art History at the Faculty of Arts, Charles University in Bratislava (2011-2016). Since 2019 she has been a PhD student at the Academy of Fine Arts under the supervision of doc. Daniel Grúň. Her dissertation research deals with the possibilities of the critical museum in post-socialist conditions. Since April 2021, she has been working as a curator at the Jozef Kollar Gallery (GaJK) in Banská Štiavnica, which is part of the Slovak Mining Museum. In 2019, she collaborated with Lucia Tkáčová and the HIT Gallery on the project Golden Times at GaJK. In 2017-2019 she worked as a curator at the Nitra Gallery. Her recent curatorial projects include It´s not over till it´s over (2021, Kunstverein Eisenstadt, with Barbara Horvath), GENESIS (2019, GaJK, B. Štiavnica), Harvest (2019, Nitra Gallery), Constructive Lyricism (2018, MEDIUM Gallery, Bratislava), #OK - XII. Triennial of Small Object and Drawing (2018, GaJK, B. Štiavnica, co-curator Erik Vilím) and I am not here, I am in Arcadia (2018, Nitra Gallery).

Anna Remešová is the editor-in-chief of the online art magazine Artalk.cz. She graduated in Theory and History of Modern and Contemporary Art from UMPRUM and was a member of the Atelier without a supervisor. In the past, she coordinated the UMA Audioguide project and together with artist Alžbieta Bačíková she led the etc. gallery, where she researched documentary strategies in contemporary art video. Her main focus is on the institutional conditions of the art scene and the transformations of contemporary art in the context of feminist and decolonial critique, specifically in her PhD research at the Academy of Fine Arts in Prague, where she has been studying since 2021.

Miloš Vojtěchovský was born in 1955 in Prague, where he lives. He graduated in aesthetics and art history at the Faculty of Arts, Charles University in Prague. Since the mid-1970s active in the field of independent music (Mozart K) and visual arts in Prague and elsewhere. From 1984 to 1995 he lived in Amsterdam where he ran the exhibition space Oko (1988-1992). Co-author and initiator of the multimedia project Orbis Pictus Revised for the ZKM in Karlsruhe (1991-1995). Initiator and organizer of the interdisciplinary Centre for Metamedia (Plasy Monastery 1991-1999). Prepared a number of exhibitions, e.g. with Jaroslav Anděl Dawn of the Magicians (NG Prague, 1996/1997), with Daniel Vlček 16 - 20 000 HZ (Meetfactory); The Feast of the Work by Martin Zet (GMP), Sounds Codes Images (GHMP, with Jitka Hlaváčková and Milan Guštar), etc. Editor and publisher of catalogues and audio CDs from the Hermit symposia and the Centre for Metamedia Plasy; at the Centre for Contemporary Art in Prague he collaborated on the network project cafe9, the Ready to symposium (Prague, 2001), the symposium Excavation the Future (Goethe Institut, Prague 2002), the Fmedia04 conference (NOD, 2004), the international project TROIA (2004), the communication network Radiojeleni.cz and LemurieTAZ (2000-2009). Together with Peter Cusack he founded the sound map of Prague sonicity.cz and together with Dagmar Šubrtová he prepared the project Frontiers of Solitude (2016-2017) for Gallery Školská 28. Initiator of the network for acoustic ecology CENSE (2018-2022).

Event is part of the exhibition project We Have Never Been Closer currently running at tranzit.sk. 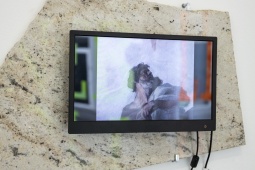