We were supposed to open the exhibition “Ecologies of the Ghost Landscape, The Word for World is Forest” curated by Borbála Soós in early April 2020. In the meantime, in response to the spread of COVID-19, a part of the project moved online and consisted of online reading groups, textual and audiovisual contributions curated by Borbála Soós and participating artists.

We are very happy to announce that the exhibition will open in the physical space on June 11, 4 p.m. – 8 p.m. Apart from the exhibition, during the opening, you will be able to discover a small garden across the street from tranzit that is usually not accessible.

Unfortunately, curator Borbála Soós who is currently based in London, won´t be able to make it to the opening in person but you are welcome to join her lecture-performance on June 10, 6.30 p.m. via Zoom.

The underlying condition in which this exhibition came about is a global emergency, one which is emerging out of an unfolding ecological crisis and can be attributed to the violent process of rampant deforestation, which constitutes a continuation of imperial methods of territorial control. This massive reshaping of the land, together with the shifting baselines regarding what kind of green deserts we are willing to accept as forests, might be seen as a symptom of our Anthropocene epoch. The show conjures up the ghosts of lost or near-extinct species, forests and sensations.

The ongoing colonial and capitalist expansion has been ending worlds for as long as they have been in existence, and is the main driver of the deforestation and species loss which local habitats fall victim to. The displacement of communities and the severing of complex entanglements follow in their wake. These processes interrupt our long relationship with the ontological multiplicity of the forest that is teeming with connections, temporalities and perspectives, a relationship that has defined cultures and even language. Hence, in this exhibition the forest is understood as an ecology including human and non-human beings, as well as the cultivation, social and cultural practices, politics, tensions and wars it entails.

In this exhibition, ideas around rewilding and renaturing feature as propositions with varying aims and interests. On the one hand, rewilding is a visionary ecosystem management strategy involving the re-introduction of certain keystone species in habitats depleted in biodiversity (due to human interference). It kick-starts processes that give rise once again to rich ecologies of multi-species entanglements. Without necessarily romanticising the past, rewilding has the potential to create rich, dynamic and resilient ecologies. Rewilding can be understood in an expanded social, political and activist sense, with the potential to help recuperate the voices of the erased, including the subjugated and oppressed, the indigenous and endemic, the human and non-human. The place ‘where wild things are’ represents the anti-hegemonic, where disorder and disobedience interrupt neat narratives, and where new kinds of structures can arise.

Rewilding and renaturing are also controversial terms. They claim multi-species relations but remain a human-centred directive (man as saviour). Whilst they have great promise as actual practical propositions to counter global warming and diversity loss, the same problems remain with their implementation regarding who controls the territories, borders and the rules of engagement, and what they expect to gain from such processes. The exhibition probes this problematic as the artworks build on situated knowledges of ecologies from diverse geopolitical areas and realities. 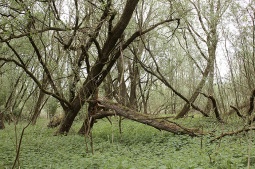