Urban Imagination Seminar. New blog on right to the city

“Cities are not only dependent on nature, they also structure the growing chaos of our natural world” writes Ashley Dawson in the introduction to his publication Extreme Cities. According to Dawson, cities are the largest triggers of climate change, but they are also the spaces in which social change can occur. They are the territories whose scale allows for the testing of large-scale thinking, as well as exploring the potential of concrete impacts and tactics in mitigating the approaching "climate chaos".

The Urban Imagination Seminar is an interdisciplinary educational program initiated by tranzit.sk, in collaboration with the Department of Architecture of the Institute of History, Slovak Academy of Sciences. Its ambition is to bring together professionals and students from the fields of art, architecture, science and technology, as well as social activists, and to educate each other in non-hierarchical ways. During the seminars they study and discuss strategies for combating dystopian trends, and deliberate over possible visions for a sustainable and just future for cities for everyone (and not only humans!) .

CASE STUDY: LIDO AS A TERRAIN VAGUE AND TREASURED

The intent of the first year is to map and consider the specific part of Bratislava, Lido territory, as a case study of planned urban transformation which allows deliberations on the right to the city from the perspective of various social groups and non-human ecosystems. In an effort to confront the commodification of public urban spaces, they could become valuable allies.

Lido is the land on the right bank of the Danube. The Soví les (Owl Forest) protected area of alluvial ecosystems is situated here. In the course of the 20th century this territory served as a zone of accessible urban recreation, sports activities and relaxation. Surprisingly, it has maintained its non-commercial nature and thus remains a place for low-cost and low-threshold urban recreation as well as vague terrain which provides shelter to many plants and animals, as well as the socially disadvantaged city populace. The current efforts of developers emphasize the creation of public spaces, but according to their perceptions as private investors. For example, the general public is not referred to as citizens, but customers (of cafes, tourist attractions, etc.). The Urban Imagination Seminar strives to focus on what this urban development narrative displaces, conceals or cannot see. “You cross a bridge: a parking lot on one side, nothing on the other side.” This comment was posted on the developer’s website. By initiating cooperation among local parties and artists, architects, experts from various areas, we want to map this “nothing” – a fragile ecosystem endangered by a developer’s transformation (social, urban, environmental) and to point out its significance for the city. 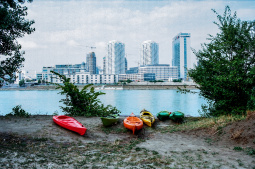