Urban planning without growth: A roadmap towards a degrowth spatial politics.

Event will be held in English via Zoom platform and livestreamed on the tranzit.sk Facebook page.

What binds planning to growth and how to move beyond a growth-based urban development? Who owns our cities and what is the role of commoning practices in future degrowth transformations of the urban? In our efforts to imagine post-growth settlements and habitats we usually employ a series of spatial images: small-scale eco-communities and urban villages of people that live harmoniously together in conviviality and solidarity or, on the contrary, planet cities and other high-tech -often monstrous- urban apparatuses that regulate their social metabolic flows based on AI and robotization. Despite their appeal, these ways of thinking about degrowth in urban contexts are often reductive because they limit themselves in blueprint thinking and thus fail to understand the mechanisms that actually bind urban development to the imperative of growth. This lecture, by using examples from the Mediterranean, tries to untangle this discussion and sketch a multilevel pathway toward a degrowth spatial politics.

Angelos Varvarousis is an urban planner who lives and works as a lecturer, researcher and curator in Athens and Barcelona. He is a member of the research collective "Research and Degrowth" since 2013 and the director of the master's programme "Degrowth: Ecology Economics, Policy". Varvarousis has authored the monograph "Liminal Commons - Modern Rituals of Transition in Greece" (Bloomsbury Academic 2022) and has edited the book "The Uncommon Planner - To Whom Does Athens Belong" (Onassis Publications 2020). He is leading research projects in Degrowth and Urbanization and his work has been presented in multiple venues in Europe, Asia and the Americas.

Event is part of the Urban Imagination Seminar that examines the right to the city from not only human perspective. 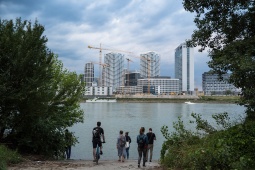