Playing Hide and Law, the current exhibition in tranzit/sk, discusses the question of the interaction of law and art. Curator Avi Feldman makes a loose reference to Jacques Derrida, in addition to others, regarding the question of deconstruction and the possibility of guaranteeing justice. Law is an institution that is found in every society. However, is it possible to get close to law and modify it? In what way do people and groups co-create law? Is it possible to establish greater justice through individual practices or a critical attitude toward law? Can the transformation of law be achieved in culture and social activity? Or are culture and law spheres of society that are so isolated that social change cannot gradually penetrate law? We deal with these questions daily, perhaps in more specific form. Because corruption, feelings of helplessness and disbelief in institutions interfere with our trust in law and faith in justice. The participants in the discussion include legal theoretician Martin Škop, Zuzana Hlávková, who stood up against corruption, and Dalibor Bača, an artist and one of the authors presented in the exhibition.

Dalibor Bača studied sculpture in Bratislava, Warsaw and Prague. In his work he expresses his own ambiguous attitude toward legal systems and the world of art and his doubts regarding the possibility of art institutions joining the constructive struggle for social and legal justice.

Zuzana Hlávková studied languages in Brno and cultural studies within the Erasmus Mundus international program. After completing her studies, she worked at the Ministry of Foreign Affairs of the Slovak Republic during the preparations for the Slovak presidency in the European Union. After uncovering illicit activity there she left and now she works as project coordinator for Transparency International Slovakia.

Martin Škop studied law and sociology and is an assistant professor at the Faculty of Law of Masaryk University in Brno. He is the author of several monographs ... právo, jazyk a příběh (…Law, Language and Story, 2013), Právo a vášeň: Jazyk, příběh, interpretace (Law and Passion: Language, Story and Interpretation, 2011) and Právo v postmoderní situaci (Law in the Post-Modern Situation, 2008). He teaches Theory of Law, Law and Art, The History of the Legal Thought, and Critical Legal Theory.

Zuzana Révészová studied law and sociology at Masaryk University. She works as a researcher in the field of culture at the National Cultural Center. She studies the overlap of social sciences, culture and law.

ERSTE Foundation is the main partner of tranzit.
The project has been supported by the Grant Scheme of Bratislava Self-Governing Region. 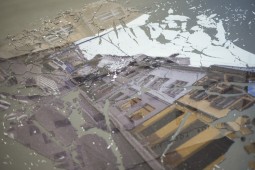 Dalibor Bača, This Country Is Not For You, 2017 © tranzit.sk, Adam Šakový