With the participation of:
Anca Benera & Arnold Estefan, Ali Cherri, Elle Márjá Eira & Mai-Lis Eira, Lucia Nimcová, documents on the Gabčíkovo–Nagymaros Waterworks from the archive of Mikuláš Huba, and The Archives of the Protest Movement against the Damming of the Alta-Kautokeino Water System (Alta Museum, Norway)

After the opening there will be a performance:
Yoik by Elle Márjá Eira at 6.30 pm

FREE SHUTTLE BUS TO THE OPENING:
ERSTE Foundation is offering a free shuttle bus from Vienna to Bratislava and back. More info here.


Rado Ištok is a Slovak curator, researcher and editor based in Stockholm. He is a curator of residencies and an exhibition at Nida Art Colony of Vilnius Academy of Arts (2018-2020) in the framework of 4Cs: From Conflict to Conviviality through Creativity and Culture, and a leader of Spaces of Care, Disobedience and Desire (2018-2020), a research project in collaboration with Marie-Louise Richards and Natália Rebelo supported by the Royal Institute of Art, Stockholm.

The exhibition entitled Liquid Horizons brings together works of six contemporary artists as well as archival material whose common denominator is the construction of large-scale dams over the last five decades. Throughout the twentieth century, dams functioned as facilitators of modernisation in terms of the electric energy they generated for newly developing industries as well as households with their modern appliances, and guarantors of a safe and stable supply of drinking water in the case of reservoirs. However, the exhibition focuses on the darker side of this modernisation, namely the price that had to be paid in terms of the displacement of various communities, the destruction of cultural heritage and damage to the natural environment.

The history of modernisation of Slovakia itself is closely tied to the construction of dams which continued through the changing political regimes. Starting with the Austro-Hungarian monarchy, it continued during the first Czechoslovak Republic, the Slovak State, and Socialist Czechoslovakia, up to the independence of Slovakia in the 1990s, when the ambitious Gabčíkovo–Nagymaros Waterworks project was completed as a beacon of the newly independent nation. And while in many countries in the developed world, such as the U.S.A. or France, numerous dams have been decommissioned over the past years to facilitate the return of wildlife to the rivers, new gigantic dams continue to be constructed across the developing world, often causing cross-border conflicts between nations sharing the rivers to be dammed. In many cases, as also shown in the exhibition, national and ethnic minorities in particular pay the highest price in the name of progress and the ‘common good’ when they are confronted with the arrival of modernity in the most disruptive manner.

Departing from the ubiquitous structure of the dam, the exhibition considers the technocratic vision of progress as inherent to modernity itself rather than being its mere by-product. In this eerie vision, virgin ecosystems, ancient heritage and indigenous communities are reduced to collateral damage and submerged under a limitless liquid horizon. Yet the fact that massive dams have been constructed all around the world also allows for new dialogues and potential gestures of solidarity between the locations and communities thematised in the artworks. The exhibition is thus also an attempt to trace shared histories and possible futures across particular locations which, due to the vast distances which separate them, are rarely seen in mutual relations and a larger context. 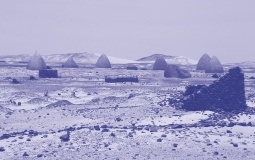