In the Schools Without Walls project and solo exhibition, Danish artist Maj Horn explores the connections between play, learning and children’s own spaces within the city. The exhibition, which consists of two videos, photos, archival materials and essential objects for play, builds on a year of field research and archival investigations in Bratislava, Beijing and several cities in Denmark, including a teaching collaboration with Dr. Ivan Dérer Elementary School at Jelenia Street in Bratislava, just around the corner from tranzit.sk.

The teaching concepts of English anarchist, architect, writer and teacher Colin Ward comprise the main source for the project. In his book The Child in the City (1978) Ward introduced the concept of a “School without Walls”, meaning that the city itself can be the setting for children’s education. His goal is to educate children to realize that they can actively play a part in shaping their surroundings, that what they say about where and how they live will be listened to, and that the key to their future lies in their own awareness.

The collaboration with Dérer Elementary School is based on curiosity about exploring how these ideas can be applied today. Through a series of workshops led by Maj Horn and Lýdia Pribišová in the urban environment of Bratislava, the following focus questions were posed: What role do children and their play fulfill in the city? Are there any unused spaces left in the city, vacant places where children can play freely, have adventures and experience independence? And how do the children experience the borders and intersections of public/private space and the power structures in the city?

One of the outcomes of the workshops is a video where the children themselves lead the viewer through streets and parks while interacting with each other and their surroundings. In the second video, we follow another group of children, filmed with the same methodology, but in Dashilar in Beijing, a historical Hutong neighborhood in the old imperial district, south of The Forbidden City. This was also made in 2018 together with artist Zhangbolong Liu and Micro Yuan’er, a non-profit Art Space in Beijing.

The first ever public-access playground was built in a park in England in 1859. It was proposed by German psychologist Friedrich Fröbel, who was inspired by the philosopher Jean-Jacques Rousseau, and his book Èmile (1762), about the natural child and the importance of play in nature. The playground was meant to be a place to teach children “good manners.” In the following years many more playgrounds were built in cities throughout Europe and in America, as play areas controlled for safety reasons, to keep children away from the streets as automobiles became more common.

In this exhibition Horn connects materials from professionally built public playgrounds with materials children have traditionally used to build their own (called junk or adventure playgrounds), with the documentation of play devices dating back to the Roman Empire.

On Wednesday, September 12 at 5 PM, a discussion about environmental education and the role of art will take place with the participation of Maj Horn, artist Nils Norman, urban activist Zora Pauliniová and Roman Javilák, a teacher at Dr. Ivan Dérer Elementary School. The discussion will be moderated by Lýdia Pribišová.

Maj Horn (b. 1987) is a visual artist, based in Copenhagen, Denmark. She holds a master’s degree from the Funen Art Academy (DK). In her work on public spheres and communities, she looks into aspects of knowledge sharing, the acquisition of sites, and the identity and atmosphere of places. She works with a range of media from photo and installations to dialogue-based processes, walks, and actions. Her work has been presented at I: project space (China), Art Lab Gnesta (SE), the Center for Art and Urbanistics (DE) and the Museum of Contemporary Art, Roskilde (DK), among others. 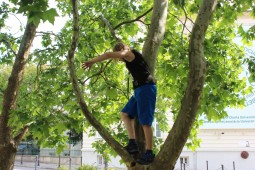 Related
Schools Without Walls
SCHOOLS WITHOUT WALLS. The Outside as a Learning Site