Ovidiu Ţichindeleanu: DECOLONIALITY AND THE FORMER SOCIALIST BLOC. For a practice-based orientation

Live stream via facebook pages of tranzit.sk and Kapitál. Event will be held in English.

Just as the former socialist bloc seemed to be finally approaching the end of its difficult transition to capitalism and liberal democracy, the Western world itself has been shaken by multiple systemic challenges, from the financial crisis and climate disasters, to military failures, global pandemics and an ongoing exhaustion of its ideological orders, manifested in the current atmosphere of polarized criticism doubled by generalized distrust. At the same time, a rising movement has been emerging in the Global South, one that was focused not only on criticism, but primarily on alternative options of development and on the hope and promise of a next great transformation based on the resources of other knowledges and practices. Decolonial thought has brought renewed attention to one’s active and historical position in the global nexus, and to the wealth of local histories facing global designs.

Yet what forms could this promise take in Central and Eastern Europe, other than through yet another wave of academic import? But what is of essence in the current work and work environments of educators, cultural workers, and visual artists? And how could informal groups, institutions and more or less peripheral locations from Central and Eastern Europe make the small steps needed in the great transformation towards an ecological and people-centered reorganization of our worlds of life and labor?

In this presentation I will take on such lofty questions guided by the experience of reorienting sensibilities of a few projects and practices developed in recent years in Romania, in the effort to articulate hope from where we are and with what we have.

Ovidiu Ţichindeleanu (1976) is a philosopher and cultural theorist living in Cluj and Chişinău, writing on critical social theory, decolonial thought, alternative epistemologies, and the cultural history of post communism. He is editor of IDEA arts + society (www.ideamagazine.ro), collection coordinator at IDEA publishing house (www.ideaeditura.ro), editor of the online journal CriticAtac.ro, co-founder of the independent journal Philosophy&Stuff (1997–2001), and of the Romanian Indymedia platform (since 2004). He is a faculty member of the Decolonial Summer School Middelburg. He is co-founder of the Centre for the Study of Modernity and the Rural World in Telciu (since 2016), the latter being the organiser of the Telciu Summer Conferences and the Telciu Summer School. He is a co-editor of The Anticommunist Illusion (Chişinău: Cartier, 2008), Romanian Revolution Televised: Contributions to the Cultural History of Media (with Konrad Petrovszky, IDEA, 2009/2011) and the author of Contracultură: rudimente de filosofie critică [Counterculture. Thoughts on Critical Philosophy] (IDEA, 2016). He translated into Romanian books by Silvia Federici, Sylvia Marcos, Walter Mignolo, Arturo Escobar, Lewis Gordon, Immanuel Wallerstein, Ivan Illich, Gilles Deleuze, and Peter Sloterdijk.

Event is part of the Art Connected series of tranzit.sk and is organized in cooperation with the magazine Kapital. 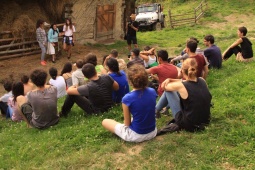