Racism Told from the Perspective of Affected People

8 September, 6 p.m.
Live stream through the Facebook page of tranzit.sk.

The event will be held in German and Slovak.

Part of the exhibition Life, Death, Love and Justice, on view at tranzit.sk between June 8 – October 15, 2021, İbrahim Arslan’s lecture deals with the question of racism in Germany. Peter Sit, the co-curator of the exhibition, will moderate the event, and contextualize it in the framework of similar patterns in Slovakia.

As a survivor of the racist arson attacks in Mölln (Germany) in 1992, İbrahim Arslan has been trying to bring the perspective of those affected, including his own, to the fore at every opportunity since 2007. His goal is to bring about a rethink in society by making us deal much more with the victims and survivors instead of the perpetrators. We are always interested in the perpetrators, but what about the victims and survivors? That this is the case is indicative of the collective misconduct of this society, the media and politics. This must be changed. It is exactly this gap in society that İbrahim Arslan is trying to fill with his lectures and his resistance: "Victims and survivors are not extras, they are the main witnesses to what happened" - İbrahim Arslan

İbrahim Arslan is an activist born and based in Germany. He gives anti-racist workshops, speaks up to the public and encourages other victims in raising their voices. Recently he participated at the digital congress Antifaschismus 2021: Complex Memory - Complex Strategies: Digital Congress, organized by Kampnagel, Heinrich Böll Stiftung Hamburg, and Metropolis Kino Hamburg.

Peter Sit is an artist, curator, organizer and publisher based in Bratislava. In 2012 he co-founded the art collective APART.

Event is part of the exhibition Life, Death, Love and Justice curated by Didem Yazıcı and Peter Sit. 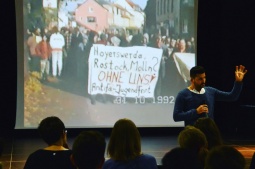