Nature that Nobody Takes Cares of II

Guided Botanic Tour through Lido with J. A. Šturma

The guided tour will be one of the events of a two-day intensive botanical and landscape survey of Bratislava’s Lido area, which comprises an interesting mosaic of alluvial forests, suburban vegetation, river bank biotopes and purely urban spaces. When walking through the most interesting parts of Lido I will try to outline its “natural history” and the context of the landscape, to show its most valuable biotopes and significant botanic findings and to suggest how to treat this area – from the perspective of a biologist.

graduated with a degree in geobotany from the Faculty of Sciences of Charles University in Prague. He has been working with the botany and ecology of urban and suburban spaces for many years. However, he is also interested in less common brownfields on this side of the former Iron Curtain, the flora of the Sudetenland and the application of geobotany in town planning.

Event is part of the Urban imagination seminar. which aims at reflecting the right to the city from various, not exclusively, human perspectives. It is realized in cooperation with the Urban Action Kemp. 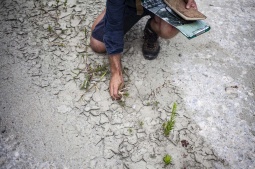