“Cross the bridge: There’s a parking lot on one side, and nothing on the other.”, states the developer regarding the territory on which “New Lido” - one of the largest investment and construction projects in Bratislava, should be carried out.

Lido is situated on the right bank of the Danube River between the Old Bridge and the Apollo Bridge and continues towards the Harbor Bridge. Despite its central location it is primarily a terrain vague, which harbors many plants, animals, precious alluvial ecosystems as well as a community of socially disadvantaged persons, gardeners, sailing clubs and the general public.

The plans of J&T and HB Reavis, the most influential Slovak developers in the New Lido project, emphasize the creation of public spaces, a central park and a national congress center. They are the latest layer of unimplemented plans for the ideal right-bank center of Bratislava, which have accumulated in the course of more than one hundred years, and which should take place on the “green field” of Lido. It is also a conventional project aiming to privatize and commercialize one of the last undeveloped areas of the city.

The guided walk with architectural historian, Peter Szalay and human geographer Pavol Šuška, will map the transformations of the town-planning visions, as well as the “NOTHING” that architects and investors have and want to replace. The local history of Old Lido will be a stepping stone for a discussion and understanding of the processes and mechanisms that characterize today’s unfair and unsustainable urban development practices.

Event is part of the Urban imagination seminar. which aims at reflecting the right to the city from various, not exclusively, human perspectives. It is realized in cooperation with the Urban Action Kemp. 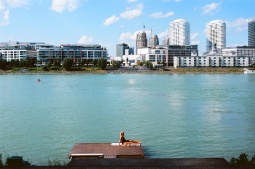