Cabello/Carceller: The State of the Art – Some possibilities for a queer riot from the surrealistic South


The event is part of the program related to the exhibition QUEER STORIES on view at tranzit.sk until March 16, 2019.

The event series has been supported by the Austrian Cultural Forum.

Reference, deference, difference… these were the three concepts that Griselda Pollock used to define the path that avant-garde artists had to follow if they wanted to obtain public recognition that granted them a position in the art world. Reference, when placing their work in a recognizable context; deference towards a well-known top artist; difference to make their work legible to art critics, but to simultaneously place it a step ahead.
But what could a queer artist coming from a Mediterranean country at the beginning of the nineties do? Following the opposite path seemed to be an option: isolation, iconoclasm, indifference… in short, “working without the pressure of success”, enjoying the freedom of knowing that hardly anyone at that time would believe in the transformative ability of what was being proposed; working from marginal positions that allow us to construct identities and alter narrations without being seen or heard.
In times of the recurring economic crisis that activates the resurfacing of neo fascist movements, it’s become crucial to confront art practices that hold the hegemonic models of production and presentation. Alternative stories and imaginaries have come to be more necessary than ever.


Cabello/Carceller was formed as the artist team of Helena Cabello and Ana Carceller in 1992. They live and work in Madrid, and have developed a transdisciplinary body of work to interrogate hegemonic modes of representation in visual/cultural practice, proposing critical alternatives. Using tools from feminist, queer and decolonial theories as well as visual/cultural studies, they produce works that question the neoliberal model of social production. Taking a conceptual and politically engaged focus as their starting point, they use strategies like appropriation, performance and fictional stories to question modernist narratives that ignore political minorities. Their method is based on reciprocal collaboration, and on the incorporation of actors - mainly amateurs - and external agents, enabling them to offer representations of displacement and imbalance that reveal resistances and divergences in the face of established values.
Over the course of nearly three decades Cabello/Carceller have participated in many group exhibitions and have had several individual shows, notably: the retrospective Draft for an Untitled Exhibition (Chapter I, Chapter II, and Chapter III), at MARCO, Vigo, CA2M, Madrid, and MUAC, Mexico City. Other solo shows include Lost in Transition _a performative poem, at IVAM, Valencia; Rapping Philosophy: Foucault, Sontag, Butler, Mbembe, at Galería Elba Benítez, Madrid or Off Escena: If I Were…, at Abierto X Obras, Matadero Madrid. They were part of the Spanish Pavilion at the 56th Venice Biennale (2015), and have participated in such group exhibitions as Cosmopolis and Hors Pistes: The Art of Revolt, at the Centre Pompidou, Paris; BB4 Bucharest Biennale; Global Feminisms, at the Brooklyn Museum, New York; The Screen Eye or the New Image, at Casino Luxembourg; and the V Bienal Latinoamericana de Artes Visuales in Curitiba, Brasil. Their work has been included in Art and Queer Culture, a major historical survey published by Phaidon Press. 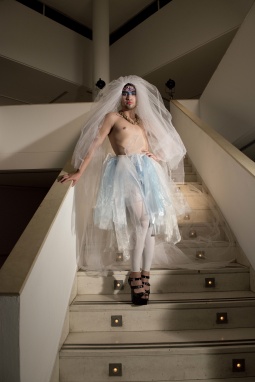 Cabello/Carceller - Lost in Transition _a performative poem, 2016. Courtesy of the artists.