The lecture will be conducted in English.

A collaboration project between tranzit/sk and Studio IN (Department of Intermedia and Multimedia, Academy of Fine Arts and Design, Bratislava) in the context of the Open Studio program.

Project Open studio is supported by Ministry of education Slovak republic in program KEGA (no. 005VŠVU-4/2016).

In times of highly charged sentiments around nationalisms and identity, the ‘where' and ‘how' of an art work as well as the idea of ‘representation’ gain complexity and tension. In this lecture, Wendelien van Oldenborgh will take her exhibition Cinema Olanda in the Dutch Pavilion, ‘representing’ the Netherlands at the 57th Venice Biennial 2017, as a starting point to look at methods and attempts of working around the idea of representation, as well as some previous pieces. In her film work, the usually precisely defined positions of the director, actor, cinematography or sound are challenged by trying out collective and open modes of production in order to gain a sense of ‘presence’ or ‘presenting’, that allows for the surfacing of multiple voices in an attempt to counter the defined or dominant narrative.

Wendelien van Oldenborgh develops her work whereby the cinematic format is used as a methodology for production and as the basic language for various forms of presentation, collaborating with participants in different scenarios, to co-produce the script. With these pieces, which look at the structures that form and hinder us, she has participated in various large biennials, and in smaller dedicated shows. Recent presentations include: Cinema Olanda, solo at the Dutch Pavilion at the 57th Venice Biennial, 2017; .As for the future. solo at DAAD gallery, Berlin, 2017; I am a native foreigner, Stedelijk Museum Amsterdam, 2017/18; Future Footnotes, solo at Significant Other, Vienna, 2018. Wendelien van Oldenborgh lives and works in Rotterdam and Berlin. 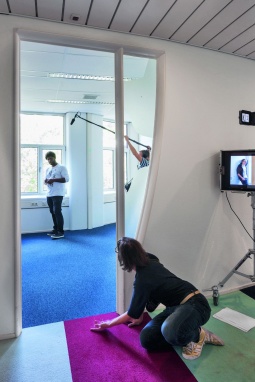