Slavomíra Ferenčuhová: CITIES AND ADAPTING TO THE IMPACTS OF CLIMATE CHANGE

To participate at the seminar, please register at workshop.mobility@gmail.com by October 24!


The event will be conducted in Slovak.


Slavomíra Ferenčuhová works at the Institute of Sociology of the Czech Academy of Sciences in Prague. From 2008 to 2018 she was a lecturer at the department of sociology of Masaryk University in Brno. In 2007, she and her colleagues, Barbora Vacková and Lucie Galčanová, founded the tradition of the biennial Brno Czech-Slovak “Conference of Interdisciplinary Studies of the City”. Her research focuses on urban sociology, and based on the example of the Brno development concepts between 1951 and 2007 she studied the transformation of ideas and ideals applied to urban planning in the Czech Republic (and Czechoslovakia) during the socialist era and after 1989. From 2012 to 2013 she worked on a post-doctoral project dedicated to the history of sociological research and theory in the 20th century and the beginning of the 21st century. She has participated in critical international discussions concerning the research of post-socialist cities and had a hand in editing six thematic issues of journals oriented on urban social-scientific research (Sociální studia / Social Study, Sociologický časopis / The Journal of Sociology and Lidé města / City People) and published in magazines such as The International Journal of Urban and Regional Research, The Geography Compass and Eurasian Geography and Economics. She is the author of two monographs: Meno, mesto, vec / Name, City, Thing (MUNI Press 2011) and Sociologie města 20. a 21. století / Sociology of the City of the 20th and the 21st century (SLON 2013). She is currently working with her colleagues from the Institute of Sociology on a new project entitled Lokální reakce na změnu klimatu v České republice sociologickou perspektivou / Local Reaction to Climate Change in the Czech Republic from the Sociological Perspective (Grantová agentura ČR (Czech Republic Grant Agency) 2017–2019).

Lecture and seminar of urban sociologist Slavomira Ferenčuhová is the first event within Urban Imagination Seminar.

In her lecture, Slavomíra Ferenčuhová will focus on what urban sociology can contribute to expert discussions concerning the impacts of climate change on Central European metropolitan areas and on the possibility of cities to adapt to these changes. We will focus on how sociological research helps to understand the wider cultural context in which cities and municipalities react to the changes (or do not react at all), rather than on the participation of sociologists in the decision-making process of cities. The lecture will also address the central problem of urban adaptation to climate change, namely the tension between public and private interests.

At the seminar which will take place the following day, we will study, map and discuss the topics of public discussions on climate change and of the adaptation of the cities based on specific materials related to Bratislava (particularly strategic documents of the city) and on projects which react to climate conditions in other cities. Discussions on how to analyze text materials and how sociology approaches them and places them in a historical context and the story of urban planning in Czechoslovakia in the 20th century will also be part of this seminar. 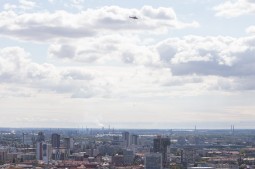