Whom Does Precarity Serve? What Can We Do?


iLiana Fokianaki is a writer and curator based in Athens and Rotterdam. In 2013 she founded State of Concept Athens, the first non-profit gallery in Athens. In 2016, together with Antonia Alampi, she founded Future Climates, a platform that aims to propose viable futures for small-scale organizations of contemporary art and culture. Since March 2017 she has been the curator of Extra City Kunsthal in Antwerp.

Kristina Országhová is an artist and head of the visual section of Kapitál, magazine on culture and society. She is engaged in artistic research and collective practice.

Lýdia Pribišová, an independent curator and editor-in-chief of the magazine Flash Art Czech & Slovak Edition, lives and works in Bratislava. From 2013 to 2015 she worked as the project coordinator at tranzit.sk, and in 2007 and in 2011 she was the co-curator of the Slovak section of PragueBiennale. She has cooperated as a curator with many public and private institutions at home and abroad.

Teri Szűcs is a literary historian, university educator, and ex-critic based in Budapest. Her interests are the literature of the Holocaust, Hungarian Romani literature, feminist art, and the interconnections of art and solidarity.

This project is supported by public funds provided by the Slovak Arts Council.

Economic and political crisis, instability, rising nationalism and right-wing populism combined with authoritarian cultural policies as well as uneven relations between European countries arising from their positioning on the scale of financial power have influenced art institutions and their cultural workers while exposing their vulnerability. It is not only precarity as we know it, normalized in neo-liberal capitalism, but there are other aspects such as the politicization of cultural funding in some countries, the instrumentalization of one’s weakness by transnational mega-institutions and the overall undervaluation of art and culture.

On this occasion, the presentations and joint discussions with artists and curators from Greece, Hungary and Slovakia will focus on the changes that are taking place on the individual local art scenes, the problems and challenges they face and the protective mechanisms that stakeholders are trying to develop. We will also talk about the relation between local problems and consequences arising from global phenomena.

Péter Szabó and Teri Szűcs will present the project entitled artworkerstoday (2016), which is part of the Start and Finish exhibition at tranzit.sk. It is based on interviews with Hungarian artists, curators and cultural producers through which they map the current situation on the Hungarian art scene and identify global and site-specific conditions – the impact of Neo-liberal capitalism as well as the transforming governmental system of support for art which creates precarious working conditions and a deprivation of the art scene. The artists will also present the theoretical baselines and context of their personal decision to become ex-artists, which in their opinion, if articulated publicly, is an appropriate act in response to the current developments in the political and cultural situation in Hungary.

Lýdia Pribišová will similarly summarize the local perspective and situation on the Slovak art scene. In her presentation she will talk about the working conditions of artists, curators and other stakeholders operating in the field of contemporary art. She will focus on the specific features of how the Slovak art system operates, its most distinctive problems and ambivalences.

Periphery, its geographical, political and social implications in relation to contemporary artistic and curatorial practice are reflected in the curatorial activities and critical texts of iLiana Fokianaki. As part of her contribution, she will discuss questions of ethical practice and its economics, precarity and its relation to geopolitical identities as well as other points linked to mega exhibition structures and the imposition of the Western canon. 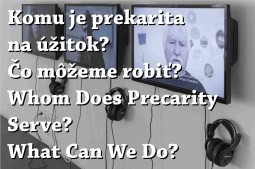