lecture and screening within the exhibition Playing Hide and Law


In the preface to The Making of Law, Bruno Latour states that law is too complicated to grasp for most of us. We can talk about a “hidden law” for its ability to escape our awareness and evade our comprehension. This tension between the visible and the non-visible, between presence and absence serves as fertile ground for art to operate in relation to law. Playing Hide and Law, the exhibition in tranzit.sk curated by Avi Feldman, attempts to expose the latent power of the law through artistic visualization and intervention.

In his lecture, Avi Feldman will discuss not only the exhibition’s theses and theoretical frameworks but he will also provide a deeper insight into the engagement between law and art. The lecture within the exhibition will take place in tranzit.sk and will be followed by the screening of Milo Rau’s documentary film, The Moscow Trials in the cinema of A4 – space for contemporary culture, a few minute walk from tranzit.

The Moscow Trials was triggered by the arrest and sentencing of the punk group Pussy Riots in 2012. According to film director Milo Rau, the prosecution, trial and conviction of the activists is a culmination of a decade of antidemocratic trials conducted by the Russian regime against artists and political activists. On this backdrop, the film depicts the staging of a three-day political trial by Rau in Moscow during which art, culture and legal conflicts are set in motion.

Since 2007, Milo Rau has been directing and producing theater work, performances, films and books as part of the International Institute of Political Murder. Utilizing the space of the court in-order to put 'reality on trial', Rau has been exploring aesthetics and substance of the criminal procedure through the staging of trials - The Zürich Trials and The Moscow Trials in 2013. In 2015, Rau demonstrated his continuous interest in the power and effect of the legal sphere by creating The Congo Tribunal.

Avi Feldman is based in Tel Aviv, Berlin, and Dresden, where he works as a curator and writer. Since 2013, he pursues a research on the present-day reciprocal relations between the fields of art and law as a PhD candidate at the University of Reading (UK) and Zurich University for the Arts. 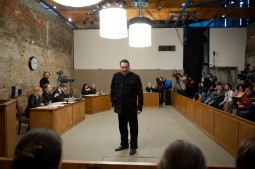