No Man is an Island. Collaborative & co-operative practices in art

The aim of these two workshop sessions is to exchange experiences about place-specific methods of contemporary cultural production that are developed outside the usual art hubs. They discuss projects anchored in specific localities that interact directly with the communities, their histories, topographies, traditional knowledge, and build on their infrastructure and network of human and non-human resources. In addition, the sessions will look at various notions such as: context- and place-specificity; collaboration and cooperation; engagement and hosting; bottom up learning processes; approaches to ethical artistic research and field work.

The workshop will be conducted in English. A small lunch is included for participants. Snacks and refreshments will be served.
The workshop is designed for students and non-students, for people interested in visual arts and film, art and film theory, sociology, cultural studies, feminism, activism and related fields.

Participation is free of charge. To participate, please register at office.sk@tranzit.org by October 24th!
In the registration please shortly describe your field of interest.

/Please note that there will be a lecture held by Ingela Johansson, Lívia Páldi and Åsa Sonjasdotter on October 26 at 5 pm at Café Berlinka, Námestie Ľudovíta Štúra 33/4, 811 02 Bratislava.
More information here./


Ingela Johansson is a Stockholm-based artist whose practice often responds to site-specific issues and involves an interdisciplinary approach and various aesthetic strategies. She questions the artist’s role as a catalyst and facilitator. Her aim is to expose and challenge the political, ethical and social systems and the history about them, all of which controls our everyday lives. Her book The art of the strike, voices on cultural and political work during and after the mining strike 1969-70 was published by Glänta in 2013. Her most recent exhibitions and projects include Moving Mass, Kalmar Konstmuseum, 2015-16 and Other Eyes on the City, Kungsbacka. http://ingelajohansson.net/

Lívia Páldi is a curator living in Budapest. Between 2012 and 2015 she was the director of the BAC. Before that, she worked as curator and chief curator at the Műcsarnok /Kunsthalle Budapest between 2005 and 2011. She has organized numerous exhibitions and has edited several exhibition catalogues. She was also a contributing editor of the East Art Map magazine and a book organized by the IRWIN artist collaborative in Ljubljana (2002–5). She was one of the curatorial agents of dOCUMENTA (13) and currently is part of the curatorial team of OFF-Biennale Budapest.

Åsa Sonjasdotter is an artist who brings about processes of matter, memory, loss and prospect, through the cultivation of plants, imagery and stories. She is a founding member of The Neighbourhood Academy, a bottom up learning site and a branch of Prinzessinnengarten, an urban garden in Berlin. She has been a professor at Tromsø Academy of Contemporary Art in Tromsø, Norway, an institution she had a hand in establishing in 2007. From 1996 to 2006 Sonjasdotter was a founding member of the Danish feminist art- and action group Kvinder på Værtshus (Women Down the Pub). She lives and works in Berlin.
http://www.potatoperspective.org/


9:30 a.m. – 11:30 a.m.
On dormant memory of peasant knowledge systems, and how its reactivation can support the refiguration of alternative cultural practices and narratives
Led by Åsa Sonjasdotter in collaboration with Oto Hudec

Conducted in the form of a conversation, the first session deals with the question of knowledge and power focusing on how peasant knowledge systems, such as the pre-capitalist Commons system in Europe, carry dormant or suppressed knowledge that can be re-traced and re-activated for the support and empowerment of societies / systems, in both central and peripheral places, and that searches for alternatives to the present day capitalist modes of production.

Participants are invited to bring locally relevant images, seeds, plants and other materials that show traces of peasant life and/or peasant knowledge. The workshop addresses the issues of engagement, self-empowerment and how life-nurturing relations can be created by establishing every-day-life-supportive economies and platforms that also contribute to the wider discussion of history and memory in order to provide methods for the reworking of cultural practices and narratives.

2:30 p.m. – 4:30 p.m.
On how to approach the collective memory of a filmrecording and create interventions in the local environment through reenactment, archives and film
Led by Ingela Johansson in collaboration with Juraj Oniščenko

Based on and followed by the screening of Ingela Johansson’s recent Gotland-based film project Andreis` Maria (Approx. 40 min.), the workshop looks at the medium of film as a surface for political messages and a form of archives. Revolving around her choice and method of filmmaking as a tool for storytelling in relation to her current residence at the Baltic Art Center in Visby, the session focuses on how research, site specificity, local histories and film history combined in this project. She will also explain how the directorial technique can benefit from the social as an expanded creative process and how she uses film as an alternative strategy for intervening in public space in the southeast of Gotland, an agricultural region.

Participants are invited to take part in smaller group discussions about topics such as montage and narrative structure/recovering and discussing documents in film format as an archives and the ethical-esthetic commitment to a conceptual narrative. We could address questions related to the reinterpretation of the script of a master filmmaker, and discuss the political, feminist and social layers of the film, about what do we mean by local and how we position art production in relation to social classes as well as the experience of creating a work for the local public in Gotland and more.

“Andreis' Maria" is an essay film about Andrei Tarkovsky´s Swedish-produced "The Sacrifice" (1986) that was shot on Närsholmen, Gotland. The Icelandic actress Guðrún Gísladóttir, who returned to the site thirty years later with her daughter Vera Illugadóttir, talks about the making of the film. It is an interpretation and a tribute to the character of Maria, the witch, who was destined to save the world from a nuclear disaster. The film reflects on Tarkovsky's criticism of civilization, dream interpretations, spiritual devotion, while going behind the scenes from Gísladóttir´s unique perspective. 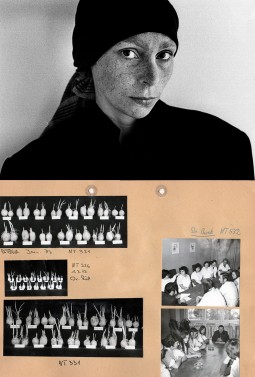 Åsa Sonjasdotter, Adretta - On Memory as Practice, Potato Breeding, and a Socialist Model Village in the GDR, (since 2013), ​Archive sheet, scan, former Institute for Plant Breeding in Groß Lüsewitz