The Story of Oppression and Exclusion

The widespread and generally accepted interpretation of Slovak history as the history of the agelong oppression of the Slovak nation frequently becomes an important argument in discussions about the ability to accept and respect something foreign. The conversation with two scholars in the context of the exhibition entitled The Ghosts of the Civil Dead will focus on the origin of the story of oppression and of the feeling of being a “colonized” nation. Attention will also be paid to the perspectives of other competing stories and the places of other groups that lived in this territory within the prevailing interpretation of the Slovak history. The reflections of contemporary ethnography often point out the pitfalls which institutions such as museums and other memory places may bring to the construction of the prevailing Slovak story. What kind of responsibility does the interpretation of historical events have and to what extent can it even serve as iniquitous soil for intolerance and building walls?

The discussion with ethnographer and cultural anthropologist Marta Botíková and sociologist Csaba Szaló, organized by sociologist Zuzana Révészová, who will also act as the moderator, will outline the deliberation of social sciences and arts over the key questions of identity and the creation of boundaries.

Marta Botíková is a professor of ethnography and cultural anthropology at the Faculty of Arts of Comenius University in Bratislava. Her research interests include ethnic issues and ethnic minorities, historical and current migrations and family studies, life cycle, medicinal anthropology, gender-related issues in culture and visual ethnography and anthropology.

Csaba Szaló is an associate professor and head of the Department of Sociology at the Faculty of Social Studies of Masaryk University in Brno. His theoretical baselines include interpretative approaches and cultural sociology. His current research is devoted to identity policy, collective memory, collective trauma, transnationalism and nationalism.

Zuzana Révészová studied sociology and law at Masaryk University in Brno. Currently she cooperates with tranzit.sk and other cultural and social initiatives in Slovakia and the Czech Republic. 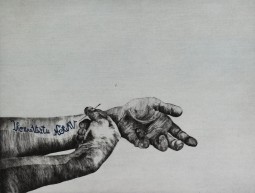