BEST BEFORE: One Year Later

The presentation and discussion will be held in English.

It was April 18th in 2015, a day that the Office of Cognitive Urbanism (OCU) considered as the imaginary date for the closure of tranzit.sk at its current location in Bratislava. It was also the imaginary starting point for the search of new locations for tranzit.sk, a search that was undertaken in the context of a workshop by OCU at tranzit.sk.

One year later, it will be April 13th, 2016
, when OCU will present a booklet documenting the lecture and workshop by OCU at tranzit.sk. We will have a discussion with OCU (Andreas Spiegl & Christian Teckert) moderated by Dominika Belanská, with the participation of Katarína Smatanová, reflecting issues of a project-based culture, the hegemony of projects and temporality in arts, architecture and institutions. Embedded in a sequence of visual arguments the discussion will refer to fissures between temporality and hegemony and to the meaning of algorithms as a metaphor of contemporary productions of temporalities, a mode of maintenance by moving from one project to the next one. 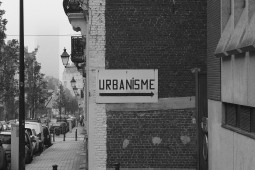