On migration outside the bubble

Guided tour and discussion
in the framework of the exhibition
Ghosts of the Civil Dead. Picturing the Society of Exclusion

A collaboration project between tranzit.sk and Slovak Debate Association.

5:30 pm
Guided tour within the exhibition Ghosts of the Civil Dead. Picturing the Society of Exclusion by its curator Christian Kravagna.
The tour will take place in English.

6:00 pm
Discussion moderated by the anthropologist Helena Tužinska, with the participation of Ema Rajčanova, Marek Moravčík and Jerguš Ridzoň, organizers of the debates within the “Sensibly about Migration” project.
The discussion will take place in Slovak.

The current refugee crisis has called forth many reactions and emotional expressions. The work of the media and politicians has often been far distanced from rational discussion. The divided public discourse has been symbolized by opposing groups, and accusations of so called “sunshiners” and “brownshirts” have not been lacking. But how to speak outside of one’s bubbles and to discuss the given theme with a cool head? The Slovak Debate Association has supported 25 young people who have organized discussions. They worked with facts and arguments, invited relevant guests from public life and people on the run, and in a courageous way have entered into the debate in their environments – at secondary schools and universities, in cafes and galleries. tranzit.sk, in cooperation with the Slovak Debate Association has invited some of these youth so that in the premises of the Ghosts of the Civil Dead exhibition they can talk about how it feels to go against the stream and use argument in a flood of emotions. How to step outside of one’s circles and discuss openly? The moderator, the anthropologist Helena Tužinská, who herself has participated as a guest in some of the debates, will interview three representatives of the organizers with respect to their own personal experience of engagement in the public discourse. What arguments have resounded the most frequently, and what issue is still the hardest to bear? 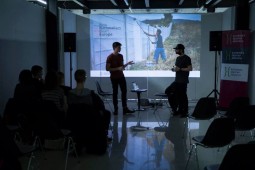