TALK ABOUT THE WALK

DISTANCES BETWEEN VIENNA AND BRATISLAVA

Stalker /Giulia Fiocca/ and Jürgen Rendl together with tranzit.sk invite you to a
TALK ABOUT THE WALK:
DISTANCES BETWEEN VIENNA AND BRATISLAVA

The discussion will be held in English

Is Bratislava closer to Vienna or Vienna to Bratislava?
Is it better to walk from Bratislava to Vienna or the other way round?
Is better to walk along the left or the right bank of the Danube?
How many borders and boundaries should be crossed? How many can’t be crossed?
Sometimes the distance between things can tell us more about things than the things themselves.
Exploring, inhabiting and mapping distances is Stalker’s habit. Come and join in!

Stalker is a collective subject, founded in 1995, that engages in research and actions within the landscape with particular attention to the areas around the city's margins, forgotten urban spaces and abandoned areas or regions under transformation that are referred to here as "Actual Territories."

Stalker promotes interventions based on the spatial practices of exploration, listening and relating and on creative interactions with the environment, its inhabitants and their “archives of memories”. These processes aim to generate social and environmental relations that are self-organised and evolve over time. The sensitive and dynamic mapping of territories and communities generated through these processes remains easy to access. These interventions promote knowledge-sharing and collaborative projects and raise the awareness of communities about their territory and their cultural environment.

Jürgen Rendl is an Austrian born and Bratislava based cultural unworker and researcher, dedicated to peripheries and marginalized knowledge. Guided by curiosity, he is constantly wandering, absorbing, and occasionally intervening at the fringes of urban life.
In 2011, he initiated the artistic research project 'Stadlnova’, based on the idea of a fictive suburb between Vienna and Bratislava. http://www.stadlnova.net He keeps records of his ramblings on http://suburbandrifter.tumblr.com/

The project is realised in collaboration with Italian Institute in Bratislava. 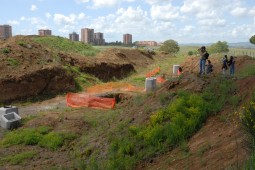