CURATING ‘EASTERN EUROPE’ AND BEYOND: ART HISTORIES THROUGH THE EXHIBITION, edited by Mária Orišková, 9.10.2014

CURATING ‘EASTERN EUROPE’ AND BEYOND: ART HISTORIES THROUGH THE EXHIBITION, edited by Mária Orišková

The discussion will be held in English.

Published by Peter Lang, International Academic Publishers, Frankfurt am Main and Veda, SAS Publishing House, Bratislava 2013.
The publication has been produced within the scope of the PATTERNS Lectures project, initiated by ERSTE Foundation and implemented by WUS Austria. www.patternslectures.org

Renewed interest in the exhibition – as the main vehicle for contemporary art – has opened art historical discourse toward a new internationalism, transregional communication and collaboration, of which the former Eastern Europe is a part. New plural, parallel, horizontal, postcolonial narratives and innovative research concepts have recently emerged, while alternative models of institutional collaborations have been dissolving old hierarchies, divisions and stereotypes. ‘Eastern Europe’ is no longer an isolated region – it is linked with different parts of the world where exhibition curating and new curatorial principles enable connections to regions, places and people around the world. The anthology under the title Curating ‘Eastern Europe’ and Beyond: Art Histories through the Exhibition examines how exhibition – as a medium which functions among curators, artists and visitors as well as between different times and places – mediates, historicizes and re-formats the histories of the art of former Eastern Europe after 1989. Since exhibition and curatorial discourse is an immensely complex and multilayered process which takes place not only in the local context but also within the global framework, the aim of this publication was to accumulate texts that would discuss various types, formats and genres of exhibitions in various institutions and in various places of Europe and the world. The concept of the publication was to go beyond the geo-political frame of Eastern Europe connected to previous regimes. The book is concerned with several overlapping themes and agendas, but the idea of the contemporary reconfiguring of the art historical canon through new curatorial practices, strategies, genres and formats is central. 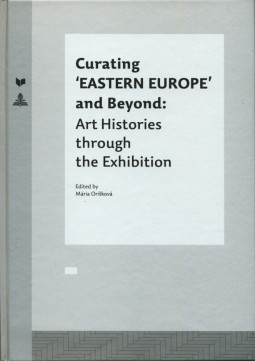