FREE SHUTTLE BUS TO THE OPENING:
ERSTE Foundation is offering a free shuttle bus from Vienna to Bratislava and back.

Don’t forget to bring your passport or ID card for the trip!


This exhibition project explores the neglected connection between the cultural and political renaissance in Czechoslovakia in the 1960’s and the decolonization project. The temporary residence of Third World students in Czechoslovakia serves as a lens for reviewing events that are key to our cultural identity.

The exhibition showcases films, posters and photographs by Africans and Asians who studied in Czechoslovakia during 1960s and 1970s as images of internationalism and cultural exchange. It also portrays Czechoslovak art, namely the Czechoslovak New Wave, as being influenced by the presence of Third World students. The cultural avant-garde of the 1960s in Czechoslovakia can also be said to affect the approach of Third World students to art and culture and thus played a role in the cultural emancipation of post-colonial countries. The Czechoslovak New Wave appears for the first time in the context of the work of significant Third World filmmakers, who studied at Prague's FAMU, such as Nabil Maleh from Syria, Mohammed Lakhdar-Hamina from Algeria, Nosratollah Karimi from Iran and others whose fate after they returned to their countries remains unknown.

The images are accompanied by archival documents such as the newspaper Forum which was published in 1968-1969 by the University of the 17th of November, the institution of higher education responsible for Third World students in Czechoslovakia. Forum was a platform where for the first time these students could write openly about their problematic experiences in Czechoslovakia and reflect on their studies and their encounters with the local customs and people. Until then, racism and xenophobia had been taboo in the socialist society and found no mention in the public media. However, the archival documents of the University of the 17th of November narrate stories of discrimination, misunderstanding and even physical abuse. It was out of solidarity with the anti-colonial movements that Czechoslovakia offered scholarships to Third World countries (albeit the Cold War power struggle also played a role). However, Czechoslovak citizens, who were not properly informed about why these students had been invited to Czechoslovakia, had a rather distorted picture of their cultural backgrounds.

Exhibition visitors are invited to learn about the political and cultural upheaval in Czechoslovakia through the perspective of Third World students, some of whom were directly involved in these events. The exhibition highlights the Prague Spring as a movement which strove for democratic communism and democratic culture, but also as an attempt to deal with the existing repression of racism and problems related to the coexistence of radically different cultures. It was during Prague Spring that these issues were discussed in the open for the first time.

It is also in this tradition that the project wishes to actualize - bring to the present - the uneasy interaction with cultural otherness. The exhibition is based on long-term research, yet it is not a historiographic exhibition. We think of it as an artistic-curatorial project, a political proposal to consider these links and exchanges as a significant legacy.

ERSTE Foundation is main partner of tranzit.
Project is realised in collaboration with tranzit.cz. This project has been supported by the Ministry of Culture of the Czech Republic. 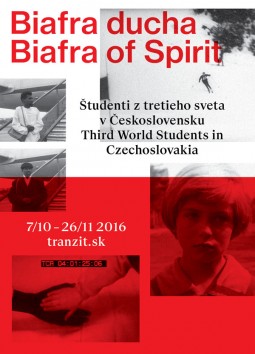