Ghosts of the Civil Dead

Picturing the Society of Exclusion

ERSTE Foundation is offering a free shuttle bus from Vienna to Bratislava and back.

Don’t forget to bring your passport or ID card for the trip!

This exhibition argues for a historical perspective on today’s society of exclusion. It makes connections between the workings of institutions such as the prison, the camp and the border wall/fence in managing economic inequality and social conflict through the physical separation of people. Pointing to the concept of containment as a political technique, it draws on Nicholas Mirzoeff’s thesis of an “empire of camps” policing today’s global migration, as well as Giorgio Agamben’s account of the camp as “the hidden paradigm of modernity’s political space.”

After the fall of the Wall and the Iron Curtain a great number of new walls have been erected. They serve to prevent routes of mobility that would threaten the economic divide established by global capitalism. After the end of the Cold War we experienced a proliferation of measures of physical exclusion. There is, of course, not only what can be called external exclusion –the fences erected in central Europe during the so-called refugee crisis being the most recent examples. There are also a number of measures of internal exclusion; think of the walls against Roma communities in Slovakia and other countries, the numerous internment camps and detention centers all over Europe and North Africa, but also the system of mass incarceration (of mainly African Americans) in the United States.

Modernity in Europe has been described as the era of social mobility fostered by capitalism and enlightenment. In the colonies however, the policing of mobility has always been a central task of colonial regimes. For the enslaved and the colonized whose labor generated Europe’s wealth, modernity had a different meaning. In the US, the economic system of slavery was followed by racial segregation and legal discrimination. The forced labor of the enslaved often turned into the convict labor system, based on the criminalization of former slaves. In the colonies, there were clear-cut distinctions between the rights of a citizen and the inferior status of the colonized that physically took shape in urban segregation and strictly controlled mobility. Orlando Patterson’s phrase of slavery as “social death” resounds in Nick Cave’s “civil dead” (his 1988 film being eponym to this exhibition) and in Giorgio Agamben’s notion of “bare life.” They all point to groups stripped bare of their status as citizens or civil subjects – prisoners, “illegal” immigrants, Sans Papiers, deportees, Roma, etc.

The contributions by five contemporary artists as well as sociologist Pierre Bourdieu, who is present with a series of photographs from the late 1950s, discuss a variety of implementations of late modernity’s camp-wall-fence-prison-complex with a focus on its racial dimension inherited from modernity’s colonial structure. With a series of almost abstract drawings, German artist Christine Meisner’s work refers back to slavery and escape in 19th-century USA. Based on extensive archival research, Emma Wolukau-Wanambwa’s (UK) installation examines the representation of the colonial prison in the British protectorate of Uganda shortly before independence. Bourdieu’s early photographs and excerpts from his writings on forced resettlement in French-ruled Algeria remind us of mass migration’s origins in colonial economies of exploitation. Ethiopian artist Mulugeta Gebrekidan’s video depicting a boat refugee in the setting of shopping malls and tourist places transfers the “iron curtain” of fortress Europe into our very city centers. Translating the tattoos on the bodies of Roma prisoners into engravings, Robert Gabris (SK/A) addresses the prison as an institution of policing social problems. Finally, Juri Schaden’s (A) film contemplates an Austrian detention center against the backdrop of its multilayered conditions determined by issues of economic development and job creation in an area affected by emigration due to structural change.

Altogether, the artists’ contributions to the exhibition – quite diverse in terms of techniques, media and method – interrogate modes of representing the political production of the civil dead. 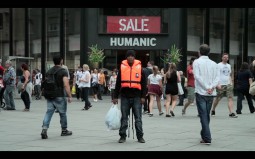