Dissolving architecture - a concept that favours social and spatial relationships over built constructions. The corridor, the exhibition’s unifying motif, an architectural element, stands for notions such as connection, transition, non-space /Marc Auge/, precariousness and temporariness. The artists, Tomáš Džadoň & Michal Moravčík, Dominik Lang and Gio Sumbadze, were invited to develop new projects, to relate to the local conditions from their different cultural and political positions and experience with architecture / space / social relationships. In the discussions with the artists it became clear that the idea of the corridor is the unifying element in their projects and approach.

Corridor changes spatial and social relationships through movement, it was invented to lead in a concrete direction and to facilitate speed. In Europe, Corridore meant first a person who runs to transfer messages. Also today, correre means in Italian to run. It offers one reality at its beginning and the other at its end. The passenger has to adapt himself to the new, changing conditions. By the 18th century, the corridor becomes a fundamental element of architecture utilized for changing spatial and social relationships. It found its apotheosis in modernity (asylums, prisons, social housing). From the First World War onwards, the corridor becomes a crucial metaphor for planning on a regional scale: there are now migrant corridors, economic corridors, wildlife corridors, railway corridors. These corridors work as metonymies. There is an interesting phenomenon in artistic approach: non-architectural entities are denominated in an architectural way. In the 20th century, confronted by the imperative of open space and the associations of the ideas of transparency and flow, the corridor is deemed an antimodernist tool that encourages cellular, inhibited buildings and behavior.

The research of Michal Moravčík and Tomáš Džadoň is based on analysis of the function/significance of the bus stop at Patrónka /Bratislava/ characterized by an unusual example of late modernist architecture. The road on which Patrónka is situated is an important traffic corridor and important nodal social point where people change buses.

The Patrónka bus stop and crossroads originated in the 1970’s as part of a complex solution of the D2 highway traffic situation, which is the corridor feeding the traffic from the Czech Republic. The author, engineer Igor Rymarenko, designed a very progressive traffic solution for the time, including a highway crossroads regulated by traffic lights. In a pioneering way, he dealt with the impact of traffic noise on human health, designing appropriate measures in response. Engineer Rymarenko also looked into the hydro-meteorological records of the area concerned, which is a sort of funnel, diffuser, corridor of wind directed from the windy Záhorie to Bratislava. The shell roofs of the Patrónka bus stop were designed to provide shelter from the wind. However, the original generous concept with a spacious underground shopping and community centre was not implemented in the end. Therefore, we may state that the space as we know it today is some sort of a fragment of the idea which aimed for every bus stop in Bratislava to be original space with added value.

Nowadays, there is a specific social situation, a concentration of poor people, temporal architecture of cheap buffets, which give to the idealistic aerodynamic architecture a bitter, abandoned aspect. As stated by Moravčík and Džadoň, this high quality architecture, in its current state, symbolizes the decrepitude of the post-transformation, modified by private interests to occupy public space and profit from it.

The artist duo of Džadoň & Moravčík, who dealt with Patrónka since the beginning of their research, later found out that engineer Rymarenko was also an enthusiastic puppet actor and initiator of the puppet theatre in Bratislava. They took this fact into account and started to view the Patrónka bus stop as a puppet theatre scene, the passengers being its marionettes.

The everyday reality of the bus stop generates repeating patterns: changing bus, waiting, watching, failing to catch a bus, frustration or emotions. The artists created situations, short typological scenes unfolding on the scale model of the Patrónka stop, which is occupied by the passengers represented by Rymarenko’s puppets. The puppet typology was made according to the collection of the engineer Rymarenko, his son, who as the successor of the family puppet theatre tradition has studied and implemented the play inspired by the Patrónka bus stop.

Dominik Lang reacted to the spatial arrangement of tranzit.sk. Here, he continues his long-term research, interconnecting his interest in spatial installations, stripping down the institutional framework and its limitations to movement. Similarly as in his previous works, he builds on the reflections of the conceptual artist, Michael Asher, on his attitudes towards contemporary art institutions; not applying a radically critical position, while accentuating the possibility of improving the “treatment” of selected situations. Moreover, Lang’s project works with the figural motif as the topic of traditional sculpture or the performance protagonist, and so on. His installation only uses a small part of the room, the rest remains “exposed”. Thus, the installation underlines the building’s tectonics. It is a corridor made of a shelf partition leaving a view to the transitional room but not enabling entry, working with the duality of presence and absence. The shelves work not only as a raster, a design in its own right, but also as a structure for objects representing the figurative component of the work. They contain neatly folded articles of clothing, compound empty shells representing a cordon of bodies around the presence/absence of which we are walking through the rooms. There is a metaphor of static performance, a wall of figures without bodies. Lang accentuates the transitional nature of the space between the rooms as well as among the works of other exhibiting authors. His installation is the backbone of the exhibition, an ideological bridge between the projects of Džadoň and Moravčík who, among other things commemorate childhood by using puppets, and Sumbadze’s structural drawings of Georgian family houses with a chimney in the centre and imaginary city maps. It is not by chance that the motif of the bridge, a space vacuum between “before” and “after”, reminds us of the current transitional status of thousands of actual bodies on their journey through Europe.

Gio Sumbadze investigates traditional Georgian chimney constructions based on technical drawings of his grandfather – an architect. These particular drawings were found by the artist in the house of the family Kirkesalishvili in the Georgian city of Akhaltsikhe. In Georgia, there is a particular system of chimney construction, which is located in the centre of the building and serves as a window and chimney at the same time. As a corridor, it connects the intimate space of the house with the sky and the rest of the world. It is a symbol of the house from inside. For Sumbadze, the chimney construction is an ambivalent element, on the one hand the home and family and on the other hand, the sacrifice of lots of trees for our warmth.

In the show, he presents these found drawings of chimney constructions, as well as his own drawings – plans of the cities, called by the artist "maps of nowhere". He is concerned with universal structures, similar to the structure of the leaves for example. Sumbadze reflects on architecture as a semiconscious generative process, similar to the growing process of the leaf. In this way, Sumbadze creates an architectural connection from inside and outside. Architecture is not only the building and urbanism; it is also thinking about it, it is a pattern of relationships.

During the exhibition 4 performances of the puppet show titled:
Changing/ Waiting of the Lower Middle Class. Patrónka, alcohol-subsonic signals of the place will take place.
The play is staged by the Iryson Family Puppet Theater, composed of Igor Rymarenko, Igor Rymarenko junior, Tomáš Michalec and Mária Schlosserová, based on the screenplay by Tomáš Džadoň and Michal Moravčík.


With the kind support of Czech Centre and Krokus Gallery 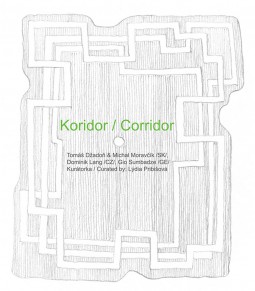