Art Has No Alternative

(An Archive of Artists in Action)

Special thanks to all the artists and:

The notion that artists are “idiots” is an oft-recurring observation among “normal”, “average” people. This has been the case for centuries, but some contemporary modes of artistic creation, such as painting with excrement, running around naked, or simply doing nothing special and calling it art, have only served to cement this most cherished social conviction. (In Athenian democracy, the word idiōtēs referred to a person who did not participate in the public life of the polis, who was self-centered and unconcerned by larger, common affairs – an attitude that the Greeks deeply condemned.)

At the same time, contemporary art is going further than ever in trying to be better than the best citizen, to serve those in need or within its reach. Artists today act as social workers, teachers, designers, or political activists in order to produce art that has a direct, inevitable, practical use for society.

Art is neither idiocy nor helping others. Doing away with this most unfruitful dichotomy, the project Art Has No Alternative aims to suggest that going against common sense, being useless, counterproductive, or incomprehensible within the frames of the current social and political consensus might just be the way for art to contribute to the sanity and well-being of its environment.

Its title taken from a stencil work by Vlado Martek from 1986, the exhibition presents artistic strategies that are played out in urban public space, and that are based on the artist's direct presence and simple actions, which might be absurd, illogical, immoral, disruptive, excessive, ridiculous, rebellious, embarrassing, heroic, poetic, risky or banal, but which no one would consider “normal”: instinctive or conscious subversions of certain norms, cases of overstepping boundaries, as well as demonstrations of the idea that possibilities beyond the consensually rational, safe and accepted should be sought out and tried. This art is not focused on the creation of objects, but rather it is meant to be a form of living one's life. It is the artist's civic competence and responsibility towards common issues that is demonstrated. However, there is no solution offered or imposed; what conclusion the startled, confused, amazed or embarrassed passer-by/beholder draws from the experience is entirely up to them.

The collection of works presented here spans a time frame from the late sixties until today and a geographical area that is known as East-Central Europe. The curatorial strategy has been to make a statement through accumulation: to gather these most innocuous, ephemeral artistic acts that happened over several decades in various urban environments, like quick, playful, angry or stubborn sparkles in the fog, and display them in image-clouds in order to accumulate and activate the immense energy they carry, in a simultaneous presentation. To gather a critical mass of artists in action, so to say. It displays photos and videos of these actions -- the methods of which range from slapstick and caricature to provocation and poetic agitation -- as an absurd tool-kit for public action: for exercises in freedom that are badly needed in the agoras of East-Central Europe. 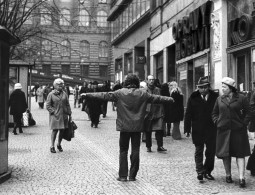