The opening will include a performance by the German group bankleer titled Sleepy Hollows (Barbora Janáková, Eva Priečková and Zuzana Žabková will participate).

What art do we believe in? Do we believe in what art can do? This is a platform by means of which we attempt to speculate on artistic activity carried out in the public interest. What is public interest? Some define public interest in terms of a legal standard as a condition varying according to time and place. Others contend that public interest is merely a rhetorical construct of politicians masking the economic interests of influential groups. What, then, is art in the public interest? Let us consider art in the public interest as an instrument by which we can shift and change accepted social boundaries. The task of this exhibition is to demonstrate the potential of art to initiate change, to compare and test means of collaboration with communities of people and individuals from various social groups. If we speak of the possibility of change, we are not seeking in it a revolutionary utopia of total social transformation, but merely pointing to the cracks that are appearing ever more visibly in democratic society.

The theme of the exhibition is rendering visible and acknowledging the unseen work and independent activity of the artist in an individually chosen terrain. It problematizes the value of a contribution that is unquantifiable and ephemeral in contrast to the promotion of results based on effectiveness and fast profit from labour. The exhibition confronts with works in which the role of the artist as observer or documenter meets the role of the social worker. Artists conduct their self-exploration in a territory that is not predefined and change the status quo by means of active engagement in interpersonal relationships. This activity counts on intervention into the social environment, economic systems, educational institutions and disadvantaged social groups. These are, for example, environments left to the mercy of degradation and pillaging, the rejected remnants of socialism, abandoned pensioners, the unemployed, segregated social groups, artificially divided communities etc.

In whose interests are artists acting when they attempt to present to us alternatives of a better world, when they urge us to be sensitive to things that can somehow be changed? If it is neither public interest nor a narcissicistic desire for self-promotion, then it is surely the need to document, testify and engage. Unlike activist approaches, we want here to emphasize artistic activity whose effect demands more time, investigation and patient evaluation. The exhibition does not present products based on seductive media self-presentation, but rather problematizes and confronts the often contradictory approaches of artists to social work.

Realisation of the project was supported
by ERSTE Foundation and Polish Institute in Bratislava. 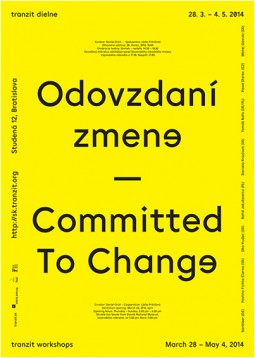