The booklet »BEST BEFORE« is the result of a collaboration between the Office of Cognitive Urbanism (OCU, Vienna) and tranzit.sk in 2015. It emphasizes the questions of temporality and its manifestation in a culture of »projects«, that are popping up ubiquitously, in the realms of economy as well as in the arts or sciences. The former character of projects as temporal interventions into the mode of indefensible permanence has turned into a hegemonic mode of production. BEST BEFORE outlines temporality in the context of architecture and institutions: Starting from the symptom of temporal ownership and politics of investment in temporality, it moves on to a culture of project based institutions that are surviving by organizing one project after the other. In the frame of projects it is their end that is defining the character of their processes. And maybe by accident there is a parallel phenomenon that is defined by its ends in order to proceed: in the fields of algorithms that one can find in architecture as well as in the realms of economy – maybe less accidentally. BEST BEFORE includes the lecture that OCU presented at tranzit.sk in January 2015 and the documentation of workshop that was starting at the imaginary closure of tranzit.sk at its current location (Best Before April 18th, 2015). 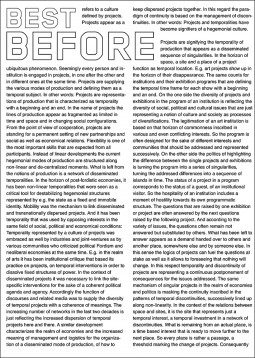