THE CITY ISN’T THE ANTITHESIS TO NATURE

“Cities are not only dependent on nature, they also structure the growing chaos of our natural world” writes Ashley Dawson in the introduction to his publication Extreme Cities. According to Dawson, cities are the largest triggers of climate change, but they are also the spaces in which social change can occur. They are the territories whose scale allows for the testing of large-scale thinking, as well as exploring the potential of concrete impacts and tactics in mitigating the approaching "climate chaos".
The Anthropocene perspective, which places humankind in the immodest position of “lords” of the planet, also crushes us, and engenders in us feelings of helplessness in the face of the irreversibility of climate catastrophe and social inequality. However, our existing knowledge clearly suggests that the complexity of life on Earth has no hierarchy, being instead a network of interconnections, each of which represents mutual relationships. We should begin to think beyond the Anthropocene; to approach the world, life on the planet and society holistically. We need to enter into “life among the species”, as Rossi Braidotti defined it, and from this perspective search for an escape from the paralysis of dystopian visions of the future and imagine a new post-humanistic morality.

The Urban Imagination Seminar is an interdisciplinary educational program initiated by tranzit.sk, in collaboration with the Department of Architecture of the Historical Institute, Slovak Academy of Sciences. Its ambition is to bring together professionals and students from the fields of art, architecture, science and technology, as well as social activists, and to educate each other in non-hierarchical ways. During the seminars they study and discuss strategies for combating dystopian trends, and deliberate over possible visions for a sustainable and just future for cities for everyone (and not only humans!) .

The General Declaration of Human Rights is a breakthrough “manifesto” for humanism in our globalized world. It represented a reaction to the racism and malignance of the hierarchy in human society following World War II, and calls for the equal treatment of all people and the protection of their physical and spiritual rights and freedoms. However, without trying to question this declaration, we believe that due to the current cataclysm of global climatic change, the equal treatment of all people is not sufficient; we should also look for ways to ensure the equal treatment of all entities, living and non-living. Thus, the framework for the seminar is the formulation of a declaration of the rights of other entities, as a process which has the potential to change hierarchic thinking in terms of the understanding of human life as an inextricable part of the environment including those other entities.

In its essence, the declaration is an appeal. Within the seminar it may create a framework which will guide us through a variety of relations among entities, from living nature to "artificial", as well as environments created by people. These can be further analyzed and applied to the specific area of the city of Bratislava. Besides, our ambition is to focus on the ways in which art and architecture can directly treat the problems of the contemporary city. We wish to test the possibilities of specific approaches, such as artistic interventions and campaigns that address the city of Bratislava, with the potential to result in a joint collective outcome whose form will also become a topic of the discussions at seminars.

A collaboration project between tranzit.sk and Department of Architecture, Institute of History, Slovak Academy of Sciences. 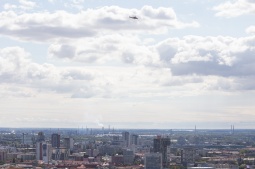