A Turtle in Ten Seconds

The lecture will be held in English. The access to the event follows the "OTP regime" (vaccinated - tested - recovered).

Rojda Tugrul’s lecture, A Turtle in Ten Seconds, concerns the spatial and memorial transformation of Kurdish inhabitant territories due to the ongoing war. In 2008, the Turkish government announced the initiation of dozens of ‘Security Dam’ projects. These dams are to be built along the Turkish – Iraqi border as well as in a few valleys in the central region of Turkish Kurdistan and represent the most extensive intervention into the rural areas of Kurdistan since the 90’s, when 3000 Kurdish villages were forcibly evacuated and three million people displaced as part of a government counterinsurgency campaign intended to deprive the PKK of logistical support.

The central motif of the lecture will be the artist’s handbook of manual drawings with the same title, which aims to capture different relationalities and temporalities of a particular place around the Tigris and Euphrates rivers. The book envisions both submerged and emerged elements in relation to the dam projects in upper Mesopotamia. While the reader visually observes these dynamics, the infant Mesopotamian soft-shelled turtle - which is an endemic species that lives alongside the affected rivers and is placed at the centre of the disrupted pages - moves for ten seconds upside-down in a moment of a water turbulence. The still images of this animation cover hundreds of pages; they follow the desire to dilate the timeframe and conceptualise an endangered species’ lifespan. This very fine dissecting process of the soft-shelled turtle - in terms of time and place - captures the political and social entanglement of this particular land which has been traumatized from the effects of the ongoing war.

Rojda Tugrul is an interdisciplinary artist and researcher based in Vienna, whose practice focuses on the notion of identity in relation to space. Her current research project seeks to analyse the effects of war on ecological and cultural heritage within the socio-political framework of Kurdish territories. Her work is rooted in the ongoing conflict between the Turkish State and the PKK (Kurdistan Workers’ Party), analyzing its consequential influence on ecological habitats. Whilst examining the spatial transformation and deterioration of a habitat as a trace of change in the culture and collective psyche of society, her work also explores the politics of art, the autonomy of artistic representations, and the power of images.

Rojda holds an MSc in Veterinary Studies and is in the process of writing her dissertation as a PhD candidate in the Practice Program at the Academy of Fine Arts in Vienna.

The event is part of the current exhibition entitled Love, Death, Love and Justice, curated by Didem Yazici and Peter Sit. 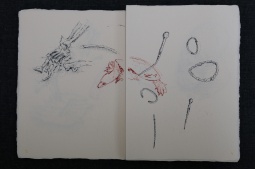