Thursday 25 March, 6 p.m. via live streaming on tranzit.sk Facebook page. Event will be held in English.

Can we imagine a space that anyone can use and transform freely, without imposing upon it the notion of the survival of the fittest? Can we conceive of a common space that exists precisely because of this? Does organizing mean planning everything, and leaving no room for the unforeseen, or does it mean creating the best conditions for something unexpected to take place? And what if minimal care was enough to leave room for spontaneity, without turning everything into chaos?

With his theory of the “third landscape”, the French landscape architect Gilles Clément argues that spaces usually treated as neglected are the most important: they are privileged areas of receptivity to biological diversity, and places of biological invention. They are road edges, abandoned factories or quarries, or eluded spaces. In 2012 Manifatture Knos and Clément started to question what “third landscape” could be: not just spaces abandoned by man, but also inhabited places. In short, between the forest and the zoo there is the possibility of a planetary garden.

Starting from the idea of a third landscape and from practices related to new forms of management of the common good, Rossella will reflect on how this idea might be declined in other possible social, political and civic terms.

Talk will be followed up by a short discussion.

Scuola del Terzo Luogo is an informal group of research who investigate the third places through actions on public space, experimentation, relations with the context with special regard to the topic of the garden. It started in Manifatture Knos, an undecided space in the city of Lecce, recovered after a long period of abandonment and returned to the city as an independent cultural center.

Event is part of a wider project by tranzit.sk entitled Urban Imagination Seminar 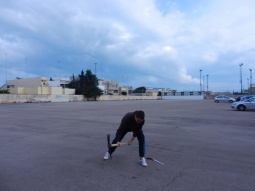