Networks and Intersections: The Unofficial Art Scene in Central Europe

Online Seminar: streaming via tranzit.sk Facebook page.
Event will be held in English.

This event is a reflection of Robert Cyprich’s theoretical and artistic work, which is also the baseline for the EXPERIMENT exhibition at tranzit.sk curated by Beata Jablonská, Jan Kralovič and Jan Mlčoch. The seminar is also dedicated to more general issues of neo-avant-garde art in Central Europe.

The structure and meaning of relations created by artists within the Central and Eastern European context from the 1960s up to the 1980s is the theme of this seminar. This region was connected by a similar political atmosphere characterized by a lack of freedom of expression and by Normalization and censorship measures. It intensified the need to communicate, to jointly search for free space for work. These mutually beneficial overlaps occurred through correspondence (mail-art, conceptual projects and photographs) as well as personal interaction at informal exhibitions and international meetings. The objective of this discussion with our invited experts is to identify similar activities and reveal their importance in the co-forming of individual art scenes. The issues related to the contextualization and incorporation of artists from this region in a wider European and global context are more intensively reflected these days. How have these issues shifted in recent years in this respect and how is it possible to strengthen the international acknowledgement of “Eastern” artists, who spent a large portion of their career in isolation behind the Iron Curtain?

The approach to processing and presenting this form of artistic activity today is the substantial motive of this seminar. How to exhibit archives of intermedia artists and what are the challenges that such material presents for a curator?

The purpose of these questions is to study the possibilities of the collecting, archiving and curatorial presenting of these artists and to inspire us to deliberate on the sense and impact of their artistic communication.

Klara Kemp-Welch is Reader in 20th Century Modernism at the Courtauld Institute of Art in London, where she teaches undergraduate and postgraduate courses on the cultural Cold War, countercultures, and experimental art. She is the author of Antipolitics in Central European Art 1956-1989 (London: IB Tauris, 2014), Networking the Bloc: Experimental Art in Eastern Europe 1968-1981 (Cambridge Massachusetts and London, England: MIT Press, 2018), and co-editor of the open access online publication A Reader in East-Central-European Modernism 1918-1956 (London: Courtauld Books Online, 2019). She is currently working on a monograph on art, labour, and migration in the EU.

Mira Keratová is an art historian and curator. She graduated at the Philosophical Faculty of Comenius University and completed her Ph.D. at the Academy of Fine Arts and Design in Bratislava. Currently, she works as a curator at the Bratislava City Gallery in Bratislava and Central Slovakian Gallery in Banská Bystrica. Some of her recent curatorial projects include extensive research-based exhibition and publication formats with works of Ján Budaj and Temporary Society of Intense Experience (Working Memory, tranzit.sk, Bratislava 2009-15 and Central Slovakian Gallery, Banská Bystrica 2015); Stano Filko (POST-BIGSF BANGSF ARTSF, A Terrible Beauty Is Born, 11. Biennale de Lyon 2011; …IN – 5. 4. 3. D. ..., Fondazione Morra Greco, Napoli 2014; HYDROZOA, SSG B. Bystrica, since 2017); Ľubomír Ďurček (Situational Models of Communication, SSG, B. Bystrica 2012 and Slovak National Gallery, Bratislava 2013); Peter Bartoš (Situations 1945 – 2014, Secession, Wien 2014; Environmental Aesthetics, Fondazione Morra Greco, Napoli 2019); Michal Moravčík (United We Stand, Divided We Fall, SSG, B. Bystrica, and New Synagogue, Žilina 2018), among others.

Zsuzsa László is a researcher at Artpool Art Research Center, Budapest and Ph.D. candidate at the Institute for Art Theory and Media Studies, Eötvös Loránd University of Sciences, Budapest. She is writing her dissertation on the emergence and critique of the concept of East European Art. She is also a member of NEP4Dissent researchers’ network and the editorial board of the online magazine mezosfera.org. Previously she worked for tranzit/hu (2008-2018) and the Studio of Young Artists (2006-2008), and was a guest lecturer at the Intermedia Department of the Hungarian University of Fine Arts, and at the Institute for Art Theory and Media Studies, ELTE, Budapest. Recent projects and books she (co-)curated and (co-)edited/authored include Artpool 40 – Active Archives, Art Networks (2020), 1971: Parallel Nonsynchronism (2018-19), Imagining Conceptual Art (2017), Creativity Exercises (2014-2020), Sitting Together (2016-17), Parallel Chronologies (2009-2021), and Art Always Has Its Consequences (2008–2010).

Pavlína Morganová, Ph. D. is an art historian and curator, based in Prague, Czech Republic. Works as a director of the Research Center and vice-rector at the Academy of Fine Arts in Prague. Recently she conducted research concentrated on the medium of exhibition, she is the co-author of the book Pavlína Morganová – Terezie Nekvindová – Dagmar Svatošová, Výstava jako médium. České umění 1957−1999 [The Exhibition as Medium. Czech Art 1957−1999] (VVP AVU 2020). She is an author of the book A Walk Through Prague: Actions, Performances, Happenings 1949−1989 (VVP AVU 2017) and Czech Action Art / Happenings, Actions, Events, Land Art, Body Art and Performance Art Behind the Iron Curtain (Karolinum Press 2015). She lectures on Czech Art of the 20th century, published number of texts in collected volumes, catalogues and professional journals. She has participated in several international conferences and worked as curator of exhibitions featuring Czech art of the 1990s and noughties.

Jana Písaříková is curator and art theorist. In 2015 she graduated from the Faculty of Fine Arts in Brno, where she dedicated herself to the subject of archives and re-enactment of action art.
Since 2015 she has been working as a curator at the Moravian Gallery in Brno where she deals with processing the collection and archive of Jiří Valoch. It gave her the opportunity to take part in forming the new permanent exhibition ART IS HERE and cooperate on the new edition of Valoch’s first collection of poems White Sheets, whose original edition in 1968 was thwarted by the occupation. She also participated in forming the exhibition of Marian Palla. She was one of the editors of the monograph Art Activities 1970-79 of the conceptual artist J. H. Kocman and the chief editor of the 72nd issue of Bulletin of the Moravian Gallery in Brno dealing with the art of the 1970s and 1980s. 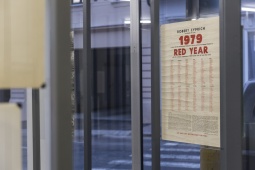