Lucia Nimcová - In Our Own Language


The event is part of the program related to the exhibition Liquid Horizons on view at tranzit.sk from April 11 until July 6, 2019.

A large part of the work of Lucia Nimcová focuses on the split between official and institutional memory on one hand and the split of personal and family experience on the other. This is because documentary photography and film, as well as museum expositions sometimes reveal more about the people who commission them and the period in which they were created than what they actually depict.
How does the picture of a world which disappeared at the bottom of the Starina Reservoir and was captured in photographs and films from the archives of the Vihorlat Regional Museum in Humenné and the Museum of Ukrainian Culture in Svidník differ from the picture of this world as it was captured by local people in their family albums and local amateur photographers or photographers who regularly returned and grew to like the place and the people living there? Can a song be a more faithful document of events than a photograph? And how to cope with the estrangement and feeling of absurdity which a person can feel when looking at something intimately familiar but taken out of context or even placed in a new artificially created context, as for example when visiting your great grandfather’s blacksmith forge which is now situated in a museum of folk architecture?
Based on her photographic installation entitled Starina within the exhibition Liquid Horizons, Lucia Nimcová will speak with Rado Ištok, the curator, about what motivates her and how the survival of identity depends on the form of presentation, the rejection of authoritative but non-authentic narrative and the production of anti-pictures.

Lucia Nimcová has a deep appreciation of the slippages between photography as an event and its operation in private and official life—the ways in which moments in both spheres are captured, some emotionally and some seemingly neutrally, by the snapping of a shutter and final selection.
Born in 1977, she lives and works in Addis Ababa. Nimcová studied at the Rijksakademie van Beeldende Kunsten in Amsterdam, Netherlands. She has recently exhibited her works at WIELS, Belgium; MUDAM, Luxembourg; National Library, Riga; The 8th Floor, New York; Krokus Gallery, Bratislava; Albumarte, Rome; BOZAR, Brussels and Galeria Arsenal, Bialystok. Nimcová is a recipient of numerous awards, including the Images Vevey Photography Prize (Switzerland), ECB Photography Award (Germany), Oskar Cepan Award (Slovakia), Leica Oskar Barnack Award (Germany) and Baume & Mercier Award (Italy).
Her works have been acquired by Stedelijk Museum Amsterdam, MUDAM Luxembourg, Slovak National Gallery and private collectors worldwide. 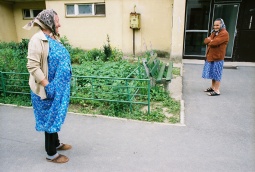