The lecture will be conducted in English.

A collaboration project between tranzit/sk, Studio IN (Department of Intermedia and Multimedia, Academy of Fine Arts and Design, Bratislava) in the context of the Open Studio program, and Kunsthalle Bratislava.

The lecture looks at the body as material, medium and technology for remembering, imagining, labouring, transforming and informing socio-economic landscapes. It also references the artist’s own performative practice in relation to situated, embodied histories, the intermingling of the local and the global, art both as possibility for insight and mass industry and ways to complicate its future.

Alexandra Pirici is an artist with a background in choreography that works undisciplined, across different mediums, from performance to visual arts and music. She recently opened a large-scale solo presentation at the New Museum in New York (2018). Her works have been exhibited within the decennial art exhibition Skulptur Projekte Munster 2017, the 55th edition of the Venice Biennale - Romanian Pavilion, Tate Modern London, Tate Liverpool, the 9th Berlin Biennale for Contemporary Art, Manifesta 10, Centre Pompidou - Paris, New Museum – New York, Museum Ludwig Cologne, the 12th Swiss Sculpture Exhibition, the Van Abbemuseum, Hebbel am Ufer Berlin, Museum of Modern Art – Warsaw, among many others. 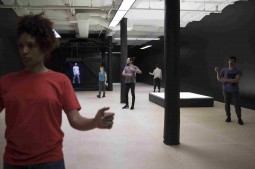