Lecture will be in Czech language.

In the context of East European art of the 1970s archive is usually interpreted as a distinct medium that was supposed to replace in limited conditions of state-controlled socialism for artists an opportunity to exhibit in official institutions. Giving independence to the elements of art conceived originally only as preparatory, such as systematically organized clippings, excerpts or notes, however, at the same time took place in the American Conceptual Art. Rather than a local phenomenon, therefore, it is a global one that was motivated by the development of information technology and a focus on documentary practices in art history. Exploring the pragmatists of archival media in diverse cultural spheres should help us understand its role in the art of the 1970s and explain the interest which was recently dedicated to it.

Karel Císař is an art theorist based in Prague. He studied Philosophy at Charles University in Prague and at University of Geneva. Since 2008 he is Assistant Professor of aesthetics and art theory at the Academy of Arts, Architecture and Design in Prague. His research interests include theory of modern and contemporary art and history of photography. He has contributed to periodicals, monographs and exhibition catalogues, most recently to Dominik Lang. Expanded Anxiety (Secession, 2013) and Běla Kolářová (Raven Row, 2013). In 2014 he was awarded Igor Zabel for Culture and Theory.

The lecture is organized within the frame of the course “Curating Archives. Critical Perspectives on Parallel Cultural Histories” supported by PATTERNS Lectures, initiated by ERSTE Foundation and implemented by WUS Austria. www.patternslectures.org. A program co-organized and co-funded by tranzitsk. sk.tranzit.org ERSTE Foundation is main partner of tranzit. The course is part of the curriculum at the Academy of Fine Arts and Design in Bratislava. www.afad.sk 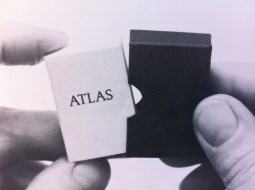 Marcel Broodthaers, The Conquest of Space (Atlas for the use of artists and soldiers), 1975