The most important cultural currents of Russian modern and contemporary art morphed into unmistakable local forms which differ from the "parallels" or "patterns" of their resources. This was the case not only with Conceptualism and Pop Art, but also with Performance Art. Its early expression was based on the aesthetics of the Neo-Avant-garde group “Dviženije” (Motion). A separate canon was formed by a hermetic action group “Kollektivny jedějstvija”(Collective Actions) as an integral part of their large interpretive text blocks and conceptual systems, producing their own theories. During the '80s, a parody line entered performance practices, discrediting both the utopian pathos of the Avant-garde and esoteric Conceptualism. At the end of Perestroika there appeared a drastic wave of performance that took advantage of interventions in the media, and in some cases in politics. Over a following number of "generations" extroverted types of performance were replaced by introvert, the scandalous by the discreet, the sensual by the intellectual. From today's distance of 25 years, continuity or discontinuity in the history of modern Russia's Performance Art may be considered, but in any case this type of artistic expression has played and still plays a significant role in current Russian culture. The lecture will attempt to capture several important trends and pitfalls of the aesthetic tradition.

Tomáš Glanc (1969) is a cultural theoretician and Slavicist. From the end of the 1980s he has been dealing with Russian culture and cultural theory, in particular contemporary literature and performance art, avant-garde esthetics, scientific literature and semiotics. Among other titles, he is the author of a book of discussions, Souostroví Rusko. Ikony postsovětské kultury. He lectures at Zürich University.

The lecture is organized within the frame of the course “Curating Archives. Critical Perspectives on Parallel Cultural Histories” supported by PATTERNS Lectures, initiated by ERSTE Foundation and implemented by WUS Austria. www.patternslectures.org. A program co-organized and co-funded by tranzit.sk. sk.tranzit.org ERSTE Foundation is main partner of tranzit. The course is part of the curriculum at the Academy of Fine Arts and Design in Bratislava. www.afad.sk 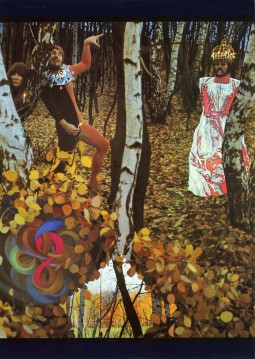