Moving in and out: the temporal house

A dialogue on the relation of ownership and authorship, architecture and reasoning by Office of Cognitive Urbanism, Vienna (Andreas Spiegl and Christian Teckert)

»tranzit.sk« in Bratislava is part of »tranzit«, a »network of autonomous initiatives in contemporary art« that is presentin different countries like Austria, Czech Republic, Hungary, Romania and Slovakia. Reading the self-definition of »tranzit« it says: »the aim of tranzit is to act translocally, i.g. in constant dialectics between local and global cultural narratives«/1/. In the context of translocality the notion of a site, of an address, is already embedded in a field of extension, in a space beyond the opposition of inside and outside. Translocality is literally addressing a moment of moving through the local site that is becoming a kind of passage, a filter of time and space just performing a site and at a site. What appears as a site is the mere act of negotiations and discourses perforating the very address. The site becomes a vibrating locality set in motion by the coming and leaving of issues at stake. The exchanging of discourses is changing the site and as well reflected in the changes of sets temporarily installed in »tranzit«. Located in a house at Beskydská 12 in Bratislava, tranzit addresses a house in transition.

Facing the history of the location of »tranzit.sk«, the transition marks a continuity, an on-going process inscribed in the character of the place. Reading the history of the actual owner of the rooms, it became the studio of K.F.A. in the nineties and was rented to a bike-shop afterwards. Now it is housing the tranzit.sk just moved in, a movement that is symptomatic for the street and neighbourhood as well. From that point of view architecture becomes an image that is framing the moving in and out, a place of permanent transition on a fixed ground, incorporating the same site and a container for different and temporal passages.

A house owned by different and changing owners is pointing generally to the question of property, maybe to a temporal property as a consequence of an investment in time, a value of exchange manifest in the changes of uses – as a space for people using it and as mere investment for owners living somewhere else. In this regard the relation between the house and its owners or people using it is based on indifference. The notion of property is time-based and indifferent to the temporal sites, independent of fixed grounds. What is left is a commodified house, a form of capital invested in a site for exchange, the paradox of an immobile and mobile property at once. For architecture building houses the question concerns a mobilized property, an architecture for temporal owners and in consequence a house without owners, an architecture without property.

In a first meeting we will design the outlines of a temporal house, a common brainstorm opening its windows and doors. It will be a kind of keynote for exchanging keys. In a second meeting we will address the consequences for the mobile design of immobile sites, of streets and neighbourhoods in the realm of transition, of cultures in migration and migrating properties.

Discussion will be held in English. 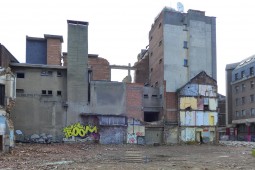