Although Robert Cyprich is a legend of the Slovak Neo-Avant-Garde scene, he belongs to its lost and unknown characters. He quietly disappeared from the art scene in the late 1980s, and in 1996 he died in almost complete isolation.

His closest friend Milan Adamčiak wrote in his obituary that he was “an excellent and sensitive observer of art and life. An uncompromising critic, interpreter of desires and wishes and art historian whose training were his contacts”. His work was indeed based on partnerships and cooperation, frequently even undocumented and unrecorded. In the late 1960s and the early 1970s this included joint projects with Milan Adamčiak and particularly with Alex Mlynárčik, such as Záhrady rozjímania (Contemplation Gardens, 1970), Deň radosti /Keby všetky vlaky sveta... (Day of Joy / If All the Trains of the World…, 1971), Memoriál Edgara Degasa (Edgar Degas Memorial, 1971) and Evina Svadba (Eva’s Wedding, 1972).

Cyprich studied art history, but never completed his studies. He was a theoretician as well as an artist, who left behind poems, texts, drawings, concepts, scores, manifests, actions and correspondence. He corresponded with artists and theoreticians from throughout Czechoslovakia, Western European countries (France in particular) and the Soviet Union. In the 1980s he participated in creating and disseminating a samizdat through his own edition P.A.N. (Pro Arte Nova).

The exhibition project entitled Experiment presents of part of Cyprich’s estate kept by Czech artist and curator Jan Mlčoch. It was destiny that several boxes of Cyprich’s archives got to him after his death, which he carefully sorted out. Mlčoch himself an action artist and a performer on the unofficial Czech scene of the 1970s, approaches Cyprich’s intensive and even self-burning life with the empathy of a person who got to know the conflicting nature of “those years”.

The exhibition features artwork as representative examples of various phases of Cyprich’s work and its variable positions. This is not a monograph of the artist, but a selective representation pointing out an important aspect of his life – his search for the meaning of art in communication, in the “poetization” of the civil, and his efforts to create impulses and disseminate them so that the art work itself would be a life practice.

Extenzívna situácia / Extensive Situation is a parallel participative project of artists who interpret as well as update the legacy of Cyprich’s thoughts, and his artistic and theoretical concepts. The artwork and performances were created specifically for this exhibition and re-update the meaning of creation based on cooperation, collective experience transfer and sharing.

In her video animation entitled Túlavé psy v revíri „estetickej rezervácie“ (Stray Dogs in the Hunting Grounds of “the Aesthetic Reservation”, 2020), Katarína Hládeková focuses on Cyprich’s non-artistic activities, particularly his interest in breeding pedigree dogs. She perceives this activity as a form of “action” which the artist resorted to with growing frequency in the 1980s.

Theoretician and poet Zuzana Husárová and programer Ľubomír Panák have been engaged in various media projects related to electronic literature for many years. Their "digital child" Liza Gennart is an experimental poetic creation. It is the name of a neuronal network that generates Slovak poetry. For this exhibition she created 7 texts entitled Kybernet, which are related to Cyprich’s article Event One: Computer Arts Society.

In their joint work Čas slnka (Time of the Sun, 2020), intermedially-oriented visual artists Katarína Karafová and Michal Huštaty reactivate the happening with the same title from 1969 in an effort to create a time-space overlap, a conceptual bridge to the present. The light environment, the altered atmosphere of the exhibition space by changing the level of brightness, is accompanied by audio commentary activating the imagination of visitors.

In his performance entitled Altruizmus „kumšaftu“ (Altruism of “Kumšaft”, 2020), which will take place during the exhibition, Martin Toldy deals with the notion of value as the extent of the capability and relevance of artwork and the self-satisfying factor or the fulfilment of the desire for success. The baseline for this work was Cyprich’s tireless search for the meaning of creative work and its application in practice and the theme of assessing artwork through the capitalistic optics of financial value.

Experimental musician Miroslav Tóth works on musical, sound and intermedial projects on the boundaries of music and theater. In the context of the exhibition, he created an original recording based on Cyprich’s texts, photographic and conceptual material and transformed them into a music medium.


Visitors are kindly asked to respect the actual anti-pandemic measures while visiting the exhibition.


We would like to thank Jan Mlčoch for selecting and loaning the works by Robert Cyprich on display.
ERSTE Foundation is main partner of tranzit. Supported using public funding by Slovak Arts Council. 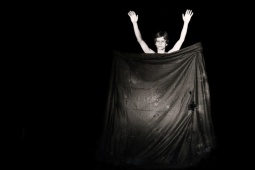