Please register by April 21 here. We´ll get back to you with the further info, the list of readings and the video conferencing link. The number of participants is limited to 20. The reading group will be held in English.

For the second reading group related to the project Ecologies of the Ghost Landscape, the Word for World is Forest we will address the idea of rewilding led by curator Borbala Soos.

Rewilding originates in an ecosystem management strategy that aims to counter manmade ecological devastation. By (re)introducing certain keystone species into areas depleted in biodiversity, it speeds up natural processes and gives rise to rich ecologies of multi-species entanglements. Without necessarily romanticising the past, it challenges traditional ecological conservation through a holistic, interdisciplinary and resilient approach. First used in the 1990s, discussions of rewilding have since expanded to incorporate ecological experiences of everyday life (Monbiot 2013), society and politics.

The Wild was created by a colonial regime to reject the Other and Other spaces, as outside of its system (Halberstam&Nyong’o 2018). The place ‘where wild things are’ represents the anti-hegemonic, where disorder and disobedience interrupt neat narratives. At this current time of climate crisis and when biopolitical regimes and capitalism have colonised life, I draw on the Wild as a powerful alternative to catalyse systemic change. It is an active anti-hegemonic space, a seedbed for cultivating disruption, queering and troubling artistic, curatorial and social practices. What kind of New Wild is possible where disorder and disobedience interrupt neat narratives? What kind of politics can rise from these spaces?

Alongside its positive potential, rewilding is a controversial and contradictory term. It claims multi-species relations, whilst remaining a human-centred directive (man as saviour). Ongoing colonial and capitalist territorial expansion have been ending worlds for as long as they have been in existence, and, whilst Rewilding has promise as a counter, the same problems remain regarding who controls the territories, borders and rules of engagement. We will continue probe this problematic together through discussions about the readings.

Borbála Soós (b. 1984, Budapest, Hungary) is a London-based curator. In 2012 she obtained an MA in Curating Contemporary Art at the Royal College of Art, London, and in 2009 an MA in Film Studies and an MA in Art History at Eötvös Loránd University, Budapest. Between 2012 and 2019 she was director and curator of Tenderpixel, a contemporary art gallery in Central London. Throughout this period and to this day she maintains an independent curatorial, writing and teaching practice, whilst she has also been an active advocate, participant and organiser of artistic, curatorial and ecological research. Borbála’s recent research focuses on the development of structures found in nature, and explores how these relate to social organisation. Her curatorial practice responds to, disrupts and enriches environmental thinking and related social and political urgencies. 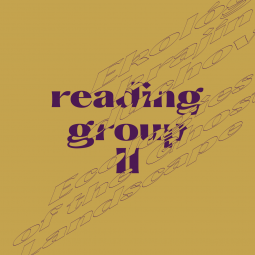