A project organized by tranzit.sk in collaboration with tranzit.hu and Kunsthalle LAB.
ERSTE Foundation is main partner of tranzit.


Polygon Creative Empire (PCE) is the pseudo name for the temporary trans-disciplinary collective that stands behind the concept of Sissi Quartier. The members of PCE are Orsolya Bajusz, Virág Bogyó, Kinga Lendeczki and Ágnes Patakfalvi-Czirják, all of whom live and work in Budapest, Hungary.

Virág Bogyó (*1987, Budapest, Hungary) is a contemporary artist, currently working on her doctoral thesis (Hungarian University of Fine Arts, DLA). She has worked on several collaborations, and her working method is mostly research-based, participatory and often deals with public spaces.

Kinga Lendeczki (*1989, Baia-Sprie, Romania) is a freelance curator and aesthete. Her main fields of interest are participatory-based art projects, community building and the transformation of urban spaces.

Ágnes Patakfalvi-Czirják (*1985, Sfântu Gheorghe, Romania) is an anthropologist and a researcher at the HAS, Center for Social Sciences, Institute for Minority Studies in Budapest.

The members of the transdisciplinary collective Virág Bogyó, Orsolya Bajusz, Ágnes Patakfalvi-Czirják and Kinga Lendeczki, combining under the name of Polygon Creative Empire, present their proposal for Sissi Quartier in Kunsthalle LAB. Sissi Quartier is a fictional investment “megaproject”. In conceiving it, the authors have followed the logic and strategies of large companies which attempt, on the basis of a subjective decision and the demands of a constantly developing capitalism, to artificially create and build up a new “region”. They explore how capital currently involves itself in the transformation of geographical spaces, and which economic mechanisms or socio-cultural elements are necessary for the emergence of these “non-historical” regions. The concept of Sissi Quartier likewise reflects the ubiquitous necessity of building the brand, for which local historical sources serve only as decorations. Such “local colour” may make the given zone attractive for further potential investments, but it is far removed from the lived reality of the local population.
For the realization of the project, Polygon Creative Empire chose an existing region sprawled on the territory of three states between Vienna, Bratislava and Győr, which economists also call “the golden triangle”, on account of its favorable geographical position and potential for cross-border cooperation. The Polygon Creative Empire’s survey (allied with their creativity) has resulted in a proposal for They propose a potential development of the “golden triangle”, one which simultaneously involves criticizing the practices of investors distinguished by their building of “non-places”. These localities are not planned primarily for the local inhabitants, but rather for the visitors who pass through the given territory, or use it for short-term stays. Apart from hotels or entertainment centres, they need to have transit zones, roads, waiting rooms and car parks built for them: all essentially necessary, but they do not bring the region any cultural added value. Imitating this strategy, Polygon Creative Empire have decided that their investment plan will not include permanent accommodation or spaces for the development of local communities, but only opportunities for work, commerce and tourism. Using the ubiquitous Sissi icon, they have planned buildings and “institutions” which together seek to create an attractive look, that of a pleasant destination offering its visitors diverse services. Furthermore, they have enhanced the entire spatial installation with advertising banners sporting catchy slogans, which in language and visuals conform to the promo-activities of investment firms. 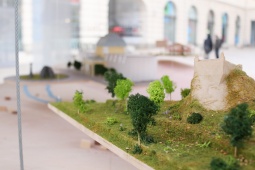