For the Time Being
performance program


For the Time Being, the program of performances arose due to the need for a break, a temporary slowing down of the work process in order to find time for more reflexive work and for the creation of more permanent values and relationships. It is an introduction to the tranzit.sk’s long-term project entitled Start and Finish conceived by Judit Angel, which will focus on the functioning and economy of contemporary culture based on projects, and, among other things, it will also pursue the search for new scenarios and ways in which artistic institutions can operate.

Both performances work with an intuitive, irrational and ritualistic form of reflexivity. While the performance of Maja Štefančíková is a criticism of the current system of production and work in general (i.e., definitely not only in culture), Zuzana Žabková creates the groundwork for a different way of experiencing reality, through metaphysics, esoterica and meditation.


ERSTE Foundation is main partner of tranzit.
This project has been supported using public funds provided by Slovak Arts Council.


Zuzana Žabková’s performance entitled Dreams of Burning Puppets addresses the possibility and process of the spiritual transformation of an individual which could also be the beginning of the systemic social transformation. It focuses on an individual’s internal feelings, mental processes and spiritual life as well as his/her psycho-physical experience, embodiment, and the integral feeling of time and space. This performance, designed as a layering and mixing of several methods of spiritual development and therapeutic practices, which she combines with contemporary dance and performative lecture elements, emphasizes self-awareness methods such as meditation, hypnosis and somatic techniques. Although the performance focuses on the individual, it also touches on the folds in which individualism and the collective spirit overlap.

Zuzana Žabková draws inspiration from folk mythology and the upcoming spring solstice. In terms of folk traditions as well as new mystical and religious movements such as neo-Paganism, this is a semantically and symbolically full moment representing a significant milestone in the transition from one state to another, purification and a new beginning. Žabková revives pagan rituals and ceremonies – such as the burning of the Morena (Marzanna, pagan goddess) in Slavic tradition – with the intention to create a symbolic temporary space, an “other temporality” which rejects the linear concept of time in favor of a cyclical but permanent and unchanging time of ritual. Thus, within current process of constantly accelerating production she creates space for inner contemplation, the deepening of mental concentration, the intensive feeling of the present moment, altered consciousness, self-awareness and harmonization with our surroundings and nature.

Zuzana Žabková is a visual artist, dancer and choreographer. She graduated with degrees in intermedia from the Academy of Fine Arts and Design in Bratislava, and choreography from the Academy of Performing Arts. Since 2014 she has been studying Choreography and Performance under Prof. Bojana Kunst at Institute for Applied Theatre Studies- CUP in Giessen (Germany). In 2016 she participated in an artistic residence program sponsored by the Triangle Arts Association in New York and received a scholarship from the danceWEB program (ImPulsTanz, Vienna) led by Tino Sehgal. In 2013 she won the Essl Award and in 2013 she was a finalist and in 2017 a co-winner of Oskár Čepan Award. 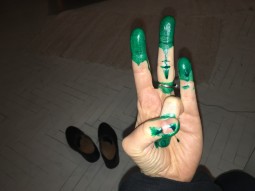