The project is realised in collaboration with tranzit.sk


ERSTE Foundation is the main partner of tranzit.

The project has been supported by the Grant Scheme of Bratislava Self-Governing Region.

The project has been also supported by Balassi Institute and Polish Institute in Bratislava.

The project was born at a seminar at the Hungarian University of Fine Arts in 2015 where the MA curatorial students conducted research on the history and everyday life of the university artists' colony at Tihany on Lake Balaton. This place surrounded by remarkable natural resources has been operated by the university since 1975 and it could be a proper example of an organised and controlled art community during the '70s and early '80s.

The 2nd phase of this research entitled Imagined Communities was a collaborative project dealing with the notion of community, collaboration, the art product vs ideas as outcomes of the residency programs and the question of whether residency should be attached to a geographically definable venue or rather a pool of ideas and shared experiences. This time, the MA curatorial students chose different locations and events (such as theatres, mountains and bars) and with their artist-student colleagues they discussed all of the above aspects. The impressions and experiences during the one-week project were summarized in a fanzine put together by the participants.

Residency Under Investigation (R.U.I), the 3rd phase of this ongoing research project, will be carried out at tranzit.sk and in the city of Bratislava between the 12th and 14th of September 2017. The project aims to create a discursive platform for mapping residency programs as such, including their current potential, historical precursors and even challenges.

Through a research based exhibition and a series of events organized by Slovak and Hungarian artists, R.U.I. also creates short-term, quasi-residency programs. This three-day event is based on the different contexts and methods that characterize such programs, and will take the form of a dialogue with the curatorial researchers investigating residency through the following topics: lifestyle, education, production and network. The invited artists will run workshops for an international group of young artists and art students.

An Open Studio will be held on the last day of the program as a summary of the R.U.I. Afterwards, the
panel discussion with invited guests will elaborate on the subtopics, while the future prospects of (art) residencies will be collectively addressed. 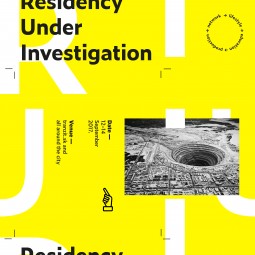