Give Us This Day Our Daily Porridge

11 – 12 am, discussion
Forming of National Identity Through Gastronomy


Get involved in cooking and/or bring your favorite ingredients for the porridge!


The event will be conducted in Slovak.


Tomáš Uhnák is a Czech artist, publicist and agro-ecological activist. He uses gastronomy as a social and political tool. He is the co-founder of the Initiative for Food Sovereignty, which promotes small ecological farming, decentralized production-distribution methods and a system of community-supported agriculture. He is interested in the field of gene banks and seeds as cultural heritage and shared commons. Within the Ecumenical Academy he has researched the unfair practices of retail chains and the CSR (corporate social responsibility) of food producers and distributors. He maps Czech and global food systems, the possibilities for food self-sufficiency and the role of migrants in food production. He regularly contributes to journals such as A2, A2larm, 7. generace, Pyré, Bioměsíčník, Deník referendum, Solidarita and Farming matters.

Katarína Nádaská is a Slovak ethnographer. She has worked as a researcher at the Faculty of Arts of Comenius University, and has lectured at several domestic and foreign universities. She has also worked as the curator and literary historian at the Bratislava City Museum and expert scientist at the Theater Institute in Bratislava. She is a member of the Etnofilm selection committee. The focus of her research includes ethnography, religious studies, in particular the history of everydayness, gastronomy and folk traditions. She is active in the popularization of science, and has written several articles (Farby, chute v vône Slovenska, (Colors, Tastes of Slovakia, 2016), Čary a veštby – mágia v ľudovej kultúre Slovenska (Sorcery and Prophecies – Magic in Folk Culture of Slovakia,2014) and curated several exhibitions (Konopná nostalgia, (Hemp Nostalgia, 2013), Bratislava v premenách času (Bratislava in Time Transformations, 1993 – 2013).

Porridge has always played a crucial role in the history of mankind and nutrition. As documented by excavations, preserved medieval cook books, weather lore and findings in the stomachs of bodies preserved in swamps, porridge is the most ancient meal of our society. The preparation of porridge was simple and did not require any special knowledge; people used the ingredients at hand, such as buckwheat, acorn flour, hemp seed and semolina, but fruit, poultry, fish, pork, venison, flowers, eggs and practically anything could be added. However, after the discovery of America, wheat and corn became the main ingredients. For many, porridge was the staple of their diet.

Historical attempts to define porridge have always been based on its consistency. The amorphousness of porridge and the related impossibility of grasping the notion of it are similar to the attempts at defining our society and the fluidity of its ideologies. We could find the similarity of its structure to the structure of the Slovak society. The consistency of porridge, which is neither very thick nor very thin, has the ability to soak up and absorb, to assimilate diverse, seemingly incompatible ingredients and structures and combine them in one organic “mass.” However, the function of porridge, which resembles the swamp in the dark wood or the color and consistency of soil, was not so much to captivate, but to nourish.

Porridge should be the so called national meal of Slovakia as it was a genuinely authentic food shared by everyone. Just as porridge is comprised of a combination of many ingredients, so the Slovak society arose as a mixture of ethnic groups and has been and still is tremendously diverse. There is no better expression of the structure and fluidity of Slovak society than porridge. However, it has largely disappeared from our meals because of the change in economic models. This change is illustrated by the fact that until the Second World War, peasants comprised 90% of the Slovak population; today they are minority. Agriculture has been industrialized and as a result, a man disappeared from land and lost his connection with soil and food. A know-how passed down from generation to generation is vanishing. The country is changing and our bodies, without porridge, are changing with it. They lack nutrition based on local ingredients for local stomachs.

During Saturday event, we will prepare various salty and sweet types of porridge at the open-air market on Žilinská Street, together with the market vendors. Our dishes will be comprised of the ingredients available at the market itself and the ingredients that you bring with you.Let´s revive the domestic and public cooking of the porridge and let´s eat the common dish of the people which is socially universal – a porridge with its diversity and variety. There will be no single recipe; our porridge will be a result of collaborative effort and invention. Cooking and eating together, it will bring us closer to those who are still connected to the soil – the small farmers / vendors who are at the margins of the interest of society.

Give us this day our daily porridge – at home, at school, at work!

GOING BACK TO PORRIDGE IS THE WAY FORWARD! 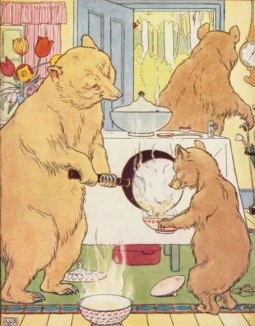