The Call of the Wild

The Call of the Wild

Presentation of collaborative project entitled The Call of the Wild, which was held in March and October 2015 at the Academy of Fine Arts and Design and the City Market on Trnavské mýto. The authors of the concept and guests will present the project, and students from the University of the Third Age at Comenius University, Slovak University of Technology and Academy of Fine Arts and Design in Bratislava will perform voice improvisations.

The Call of the Wild was created for the specific space of the City Market in Trnavské mýto as a reaction to its current condition. Nóra Ružičková and Maja Štefančíková began working on the project in the fall of 2014 and carried it out twice in 2015 in two different versions. The first instalment took place on March 16 – 20, 2015 in cooperation with composer Miroslav Tóth and with the students from the University of the Third Age at Comenius University in Bratislava. The second took place on October 5 – 9, 2015 in cooperation with musician and thespian Anna Friedländer and a mixed group (in generation and experience) of students from the University of the Third Age at Comenius University and Slovak University of Technology in Bratislava. Both times two complementary aspects were involved: a workshop and collective intervention in a public space.
The authors of the concept and the men and women participating in the workshop put together a collective event in the City Market. Their goal was to create a temporary intervention, i.e. a performance (audio composition using external voice techniques) in order to bring about a shift in how the direct participants as well as uninvolved passers-by perceive and experience the marketplace. They were reacting to the current nature of the building, portraying the feelings it evokes. The title, The Call of the Wild, is a reference - with a certain amount of hyperbole and levity - to the challenges of the “wild” public space and to the adventurous, unpredictable nature of collective and collaborative projects.

This project was sponsored by the Slovak Ministry of Culture and grant program Ars Bratislavensis.

Nóra Ružičková studied painting and graphics at the Academy of Fine Arts and Design, Bratislava, and has been teaching at the Department of Intermedia and Multimedia there since 2009. As an artist she is active in the fields of visual art and literature. In her visual arts projects she uses different mediums and forms of expression; in the last few years she has been particularly interested in examining the institutionalization and categorization of art and the relationship between image and text. She is the author of five poetry collections: Mikronauti (1998), Osnova a útok (2000), Beztvárie (2004), Parcelácia vzduchu (2007), Pobrežný výskum (2009) and the book of experimental poetry and prose Práce & Intimita (2012).

Maja Štefančíková is an artist, publicist and doctoral student in the Intermedia and Multimedia Department studying under Anna Daučíková at the Academy of Fine Arts and Design in Bratislava. In her artwork she deals with the questions of the subject, history and audience. The object of her doctoral research is the role of the spectator as subject and object of the art work. She also examines the effort spectators put into the perception, understanding and subsequent interpretation of the piece of art. She has been working with Artyčok.tv, an online platform for contemporary art, since 2009 and with Artalk.cz, a fine arts website, since 2012.

Anna Friedländer graduated with a degree in Theatre Arts (Brown University, USA) and Performance Design and Practice (Central St Martins, UK). While living in the U.S. she got acquainted with the local experimental theatre scene and held an internship first with the Wooster Group and later at Richard Foreman’s Ontological Theatre. She has been living in Prague since 2009, where she practices and teaches experimental vocal work. Anna leads vocal workshops and teaches private vocal lessons. Since 2013 she has been teaching workshops in extended vocal technique at The Academy of Performing Arts (DAMU). Beyond her vocal practice Anna has coordinated and organized numerous art events: AXA in ACTION (2011), Botana Mexicana Festival (2012), several projects for the Prague Quadrennial (2012-2013), vs. Interpretation (2014), Identity.Move! (2015), and Why Talk to Animals? (2015). Anna Friedländer is a founding member of TOPOS KOLEKTIV, a group of musicians creating site-specific improvised musical performances. www.toposkolektiv.com

Ľubica Kobová teaches gender studies and feminist theory at the Charles University in Prague. Her research focus is feminist political theory and feminist critiques of work. Recently she edited the volume Feminists Speak About Work. How Women Become Subjects of Capitalism (ASPEKT, Bratislava 2015). She spent the academic year 2008-2009 as Fulbright Student Researcher at Rutgers University.

Maria Topolčanská is a Prague-based writer and lecturer on contemporary architecture. She graduated with a degree in architecture in Bratislava (FA STU) and Barcelona (Metropolis Master in Architecture and Urban Culture, Theory and History, ETSAB UPC Barcelona). Since 2000 she has worked on architectural projects of public space and affordable housing in Catalonia. Since 2003 she has been researched 20th century architecture in Slovakia (SAS), running seminars in post-socialist urbanity and publishing archizine Fake Cities/True Stories (FA STU). She collaborates on seminars and workshops (Barcelona 2001-02, 2014; Berlin-Wolfsburg 2013-14) and writes for magazines (AD, A10, A&U, Era21). She is an independent expert for the EU Prize for Architecture and Prize for Urban Public Space (Mies van der Rohe Foundation, CCCB, Barcelona). 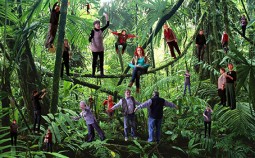