A project organized by Imago Mundi Foundation (Krakow)
in cooperation with Galeria HIT and tranzit.sk

Opening of (. . .) Behind Togetherness #2 and workshop of Mateusz Kula, Ambivalence of Warm Places

During the workshop, by using carpets and architectural structure as materials, we are going to investigate the paradoxical figures of enclosure, individuality, agora, communality, the commune, solitude, and isolation.

One is alone with oneself.
In the company of others most people are alone even without themselves.
One must break free from both of these conditions.
[Ernst Bloch, Traces]

Beginning with the question of solitude, we are going to consider the perspective of singularity/individuality as the condition of being together, fluctuation of attitudes, and political aspect of bond.

Project executed with the support by ERSTE Foundation, the main partner of tranzit and by The Polish Ministry of Culture and National Heritage.

The (. . .) Behind Togetherness cycle of meetings has been inspired by the idea that collective practice is like an unfinished text, which should always have (always has) a subtitle, an imperceptible annotation. Reading collectivity is a complex process – we feel an urge to have a look at lines that follow, at words that have not been said or gestures that have not been made, to see what is behind the thick wall of the term “collectivity.” Penetration of the structure of collectivity/text allows going beyond the unity of multitudes as well as, perhaps, discerning the polyphony that might not always be audible. (. . .) Behind Togetherness is based on the idea of collectiveness as a multitude of unities, on the never-ending process of redefining oneself and the community one is a constituent part of, rather than simply being surrounded by it. Similarly to authorship, participation can be understood as occupying a place, which helps managing the endless migration of attitudes/assumed roles that are of more apparent interest to us. They can be detected in the movements observed at the meeting point of the tectonic plates of “group-motion-community.” Following a certain intuition of language, it seems that the difference it expresses must indicate and evidence significant diversities we wish to address during our meetings.

Getting lost in a group/community may provide a chance of hearing the new voice of one’s own, which at times can sound alarmingly strange.
(. . .) Behind Togetherness is dedicated to the process of workwhich absorbs and “incorporates” other people, creators/co-creators or participants in the effort alike. The continual changing of roles may be a necessity or an expression of a longing for another dimension. Even slight fluctuations in the position with regard to the group or oneself may lead to critical shifts, also with respect to work that appears to be repeatable and reproductive, but eventually develops into a turning point that makes all the difference for a creative idea. During our meetings we are going to focus on a whole range of nuances, from execution and discreet assistance to the voice of the author.

All these questions concentrate in one specific place – a cultural institution. It reflects an entire spectrum of tensions related to collective and nonmaterial work, as well as to being together and the question of the friendly nature of work. 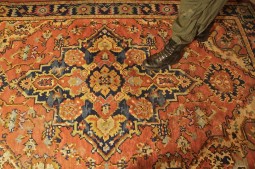