Lecture by Aldo Ramos / Q & A with Ovidiu Ţichindeleanu

Event will be held in English


Imagine the possibility of grabbing a hammer to turn concrete into dust, to crack open the white cube, not for the sake of destruction but in search for the Earth beneath, in search for the relations lost under the artifice. This is the way Aldo Ramos challenged the architectural materiality of western aesthetics. Breaking through the floor of the white cube at the Rijksakademie, Aldo reached Earth, hammered out a basin: an Earth-Port. The hammer, a sort of Mjöllnir, became simultaneously a weapon and a source of hope. In the quest for re-membering, for summoning our forgotten relations to Earth and to others, the enclosure of western aesthetics was transgressed.

In his lecture, Aldo Ramos will talk about “guarding memory” as an artistic device aiming at amplifying the voices that are being silenced, at making visible the worlds that are being erased by the empty time of the contemporary. He will address various modalities of art that can become a platform that encourages relational ways of being with the Earth as re-existence overcomes consumption.

Determined to strengthen the protection of life, his work has emerged in the interdisciplinary space of art, social practice and environmentalism. After leaving behind his life and profession as a lawyer and relocating to the Netherlands in 2010, Aldo has established a connection with others who share similar experiences, different stories but the same struggle. People who aspire to construct alternatives to the current oppressive system. Since their first encounter in Colombia in 2017, Aldo has worked with Arhuacan and other communities of Abya Yala who are considered living seeds of hope in other possible worlds. These communities have barely been acknowledged, but have never been absent. Instead, they firmly defend life in its diversity. resisting oppression, massive destruction and genocide by the current system.

Ovidiu Ţichindeleanu (1976) is a philosopher and cultural theorist living in Chişinău and Copenhagen, writing on critical social theory, decolonial thought, alternative epistemologies, and the cultural history of post-communism.

Event is part of the How to Live Together? series of conversations curated by Judit Angel, Alessandra Pomarico, Borbála Soós, Ovidiu Ţichindeleanu within the Art Connected 2022 – 2023 subprogram of tranzit.sk. 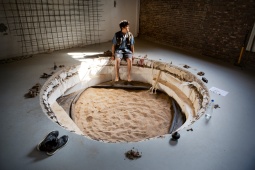