A glittering river is the perfect symbol of a city on the make, eager to attract global investment. But the idea of the post-industrial society is a joke. What really happens is a distraction of the mediated gaze, which focuses on riverside promenades, swank consumption facilities, skyrise buildings. Meanwhile, off camera in another locale, the dying old industries are replaced by new ones, such as the transshipment of raw materials and the processing of technological trash. This is what has happened in Chicago.

In this lecture and slideshow, Brian Holmes takes you on a circular journey through the city's two river systems, both of which have been reversed to flow away from the high-value lakefront. What are the forces that have created the new urban spaces? How have they been reactivated today? Will the inhabitants of the city's forgotten Southeast Side succeed in stopping the relocation of a century-old scrap yard whose fires, explosions and toxic fumes are just a little too invasive for the upscale residents of the city center?

Event is part of the Art Connected series and the Urban Imagination Seminar project that questions right to the city in the context of climate crises based on explorations at Bratislava Lido location and its intended transformation. It will be held in English.

BRIAN HOLMES is an essayist and mapmaker who puts ecology into politics and vice-versa. After twenty years of writing and rabble-rousing in Paris and around Europe, he moved back to the United States to live in the monster city of the Midwest, where he is a member of the group Deep Time Chicago. In 2019 the group participated in the project Mississippi: An Anthropocene River, co-sponsored by the Haus der Kulturen der Welt and the Max Planck Institute for the History of Science. Some more of Brian's recent work can be found here. 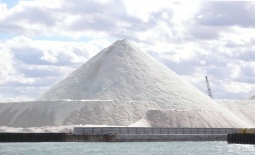 What do we worship? (Beelman Terminal, Calumet River, Chicago, 2016)